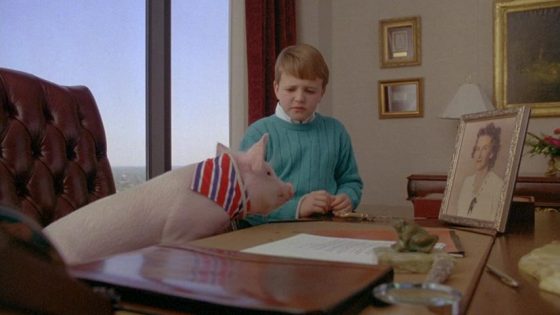 1994 saw the release of two vastly different talking pig movies.  While Babe is still a beloved classic to this day, Gordy quickly came and went and was mostly forgotten.  The movie follows a young piglet named Gordy, whose family is taken away when the farm they live on goes bankrupt.  Gordy goes on a quest to find them but finds himself become the pet of a lonely rich kid and becoming a worldwide celebrity and corporate mascot.  Although it came out first in May of 1994, Gordy became irrelevant the second Babe arrived in August of that year, despite having the backing of both Miramax and Walt Disney, who put out Gordy under the Walt Disney Home Video banner on VHS.  One thing that Gordy did have over Babe however was a ridiculous rap song from the one and only Tag Team called “Pig Power in the House”, which got a tie-in music video featuring Gordy himself and Tag Team entertaining the crowds at a theater where the music video is being shot but also premiering?  It’s definitely no “Whoomp There It Is” but it does have that distinctive 90s hip-hop vibe and it’s also a kind of classic “tell the story of the movie via rap” song akin to “Turtle Power” or anything from Will Smith.  You can check out the music video below.