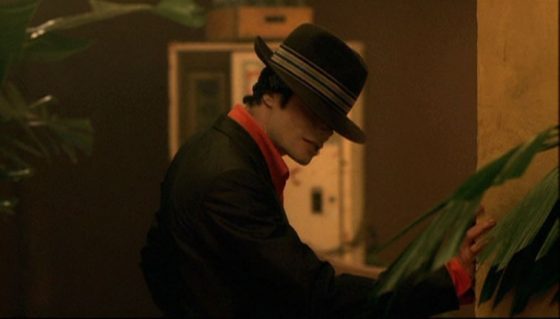 Like most of Michael Jackson’s music videos, “You Rock My World” from 2001 was basically a short film featuring a slew of famous co-stars.  The setup is that MJ and Chris Tucker are hanging out and pursuing a beautiful woman (Kishaya Dudley) and they follow her into a bar run by gangsters, led by Marlon Brando.  MJ continues to try and impress the girl but gets into a fight with Brando’s enforcers, including Michael Madsen and Billy Drago, and ultimately a fire breaks out, with MJ, Tucker and the girl making a quick escape.  The full video is over 13 minutes long and was directed by prolific music video director Paul Hunter, who would make his feature film debut two years later in 2003 with Bulletproof Monk.  The song was released as the first single for Jackson’s final album, Invincible, and reached #10 on the Billboard charts.  The single was never commercially released by itself and only obtained its position on the charts via radio airplay and Jackson only performed the song live twice for two concerts at Madison Square Garden in September 2001.  Check out the entire music video below.