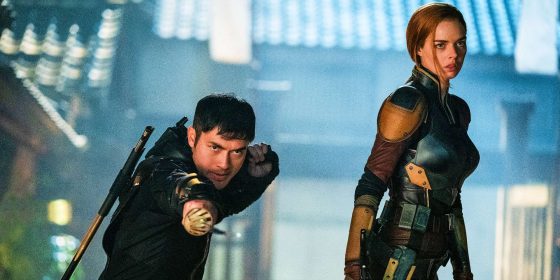 Even though 2013’s GI Joe: Retaliation was a pretty significant step-up from its predecessor, Rise of Cobra, Paramount and Hasbro decided to start from scratch with Snake Eyes: GI Joe Origins but it doesn’t generate the same level of optimism as Bumblebee did for the Transformers franchise.

Henry Golding stars as Snake Eyes (real name unknown) who sees his father murdered as a boy and has spent his life on the streets looking to someday exact revenge.  After getting involved as a low-level worker for the Yakuza in LA, Snake helps Tommy (Andrew Koji) when he’s revealed to be a spy for the Arashikage ninja clan and Tommy offers Snake a chance to train and become a member of the ninja clan as thanks.  While at the Arashikage compound and undergoing the training, Snake has a secret agenda that puts him into contact with the terrorist group Cobra, represented by the Baroness (Ursula Corbero).  The plot doesn’t do anything new or interesting that you haven’t seen in similar movies before and you can predict how things are going to play out well in advance and it’s been done better in movies like the Scott Adkins Ninja movies.  There’s also a strange lack of training in a movie that is supposed to be about Snake Eyes becoming a ninja and there’s also no real sense of time either.  Snake Eyes could be spending a week or months with the Arashikage and there’s really no way to tell and there’s no sense of progression to his fighting skills either.  He also has to undergo three challenges to fully become a member of the clan but they seem to happen at random times and in-between, Snake Eyes just kinda wanders around and does his own thing.  The attempt to bring in the overarching Joe vs Cobra universe is also extremely superfluous and feels like an afterthought, especially on the Joe’s side.  Samara Weaving plays Scarlett but she does so little and feels so shoehorned in that you could take her out or have her show up for an after-credits tease and it would have had the same impact.  Baroness at least feels a bit more integrated as she’s supplying weapons to the other main villain, a former Arashikage who wants revenge, and Ursula Cordero does the best job of nailing the attitude of her cartoon counterpart.  You don’t really get any of the cool vehicles or weaponry from the Joeverse either and Snake Eyes only gets his trademark suit at the end in a tease for a sequel that, given the movie’s box office performance, will probably never happen.  There are also some weird fantastical elements, including a superweapon McGuffin that feels a bit out of place in the GI Joe world (although granted this is a franchise with evil snake people who live in the Himalayas).

The action in Snake Eyes also feels like an unwelcome return to the pre-John Wick style of action where there are lots of cuts and the use of handheld cameras.  You would expect that a movie with actors like Iko Uwais and Andrew Koji in it would have some solid martial arts action but it all feels kind of choppy and uninteresting and you don’t get the awesome, long-form fight sequences that you might expect from something like The Raid or John Wick.  There are a few cool action beats and some pretty fantastic settings for fights but it definitely could have benefitted from focusing less on world-building and the more over-the-top action and focus more on solid martial arts and sword fights.

Snake Eyes isn’t a terrible film but it’s also completely uninteresting and doesn’t really generate any excitement for a new series of GI Joe films the same way that Bumblebee has made me cautiously optimistic for new Transformers movies.  Snake Eyes is perfectly serviceable when you are watching it but it will vanish from your mind almost as soon as you step out of the theater.  It will be on Paramount+ in a little over a month so the best bet, if you have that streaming service, is to wait and see it there for “free” or it would probably be a solid Redbox or VOD rental later on as well.