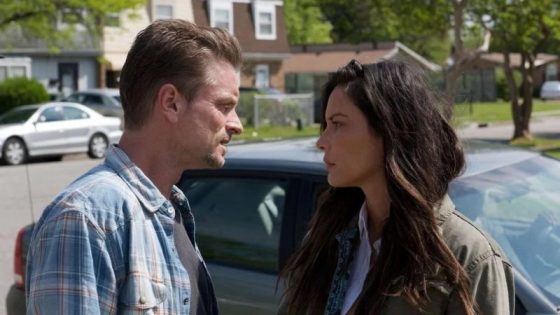 After plenty of fantastic supporting roles in stuff like Fargo, Vice Principals, Joker, Perry Mason, and more, Shea Whigham takes the lead in the upcoming action thriller, The Gateway.  Whigham plays Parker, a social worker who seems to be as adept at taking care of kids as he is with guns and kicking ass.  His latest client is Dahlia (Olivia Munn), who is in danger of losing custody of her daughter Ashley (Taegen Burns).  Things get even more complicated when Dahlia’s husband Mike (Zach Avery) gets paroled from prison but almost immediately goes to his boss, played by Frank Grillo, to steal a cache of drugs.  With the cartel now involved, Parker takes it upon himself to keep Dahlia and Ashley safe, getting help from his father Marcus (Bruce Dern).  Mark Boone Junior, Jay Hieron, Taryn Manning, Keith David, Jessica Medina, and Alexander Wraith co-star, and the movie is directed by Michele Civetta, who previously directed the horror movie Agony.  The movie is out on September 3rd in select theaters and then on DVD/Blu-Ray on September 7th.