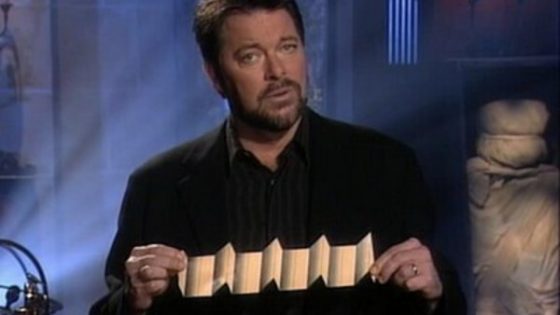 Seeing a resurgence in recent years thanks to glorious memes of host Jonathan Frakes’ various intros and reactions but many people probably haven’t actually watched a full episode of Beyond Belief: Fact or Fiction?.  Sitting somewhere between Unsolved Mysteries and a horror anthology show like The Twilight Zone or Tales from the Crypt, every episode of Beyond Belief featured five short stories that featured the paranormal and/or supernatural like ghosts, psychic phenomenon, coincidences, urban legends, and more.  The gimmick of the show was that as you watched the stories, you were tasked with guessing whether you think the story was based on a real event or if it was made up by the show’s writers.  At end of the episode, the answers would be revealed.  While Jonathan Frakes hosted the show for most of its run, he didn’t actually start until the second season.  James Brolin hosted the first season but it clearly wasn’t as memorable as Frakes’ combo of serious and snark.  That energy also translated to other aspects of the show as the series had the legendary voice-over artist Don LaFontaine providing voiceover and it was deadly serious but a lot of the stories had Unsolved Mysteries reenactment style acting and budget, so the whole show was a charmingly goofy mess of self-serious and knowingly ridiculous.  The show lasted for seven seasons from 1997 until 2002 on Fox and it also aired on SyFy and Chiller later on.  FilmRise currently has the rights to the series and, much like the OG Unsolved Mysteries, it’s available pretty much anywhere, including Prime Video and Youtube.  You can check out the first Jonathan Frakes hosted episode from Season 2 below.

Everything Action Theater: Santa vs The Snowman