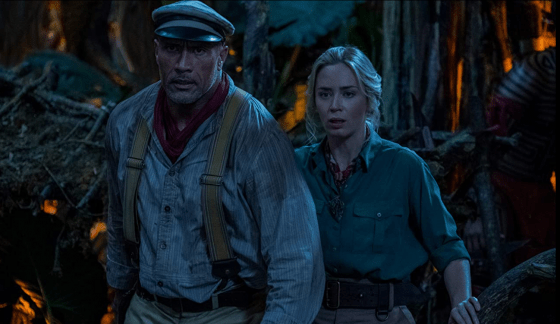 Jungle Cruise easily won the box office over the weekend with a much higher than anticipated opening, taking in more than double some of the estimates going into the weekend.

Jungle Cruise made $35 million over the weekend domestic and a worldwide total of $62.6 million.  Disney, much like they did for the opening weekend of Black Widow, revealed that the movie made around $30 million from Disney+ prime access, which would seem to indicate around a million households purchased the movie for $29.99.  The movie did better than some of the other Disney attraction movies, like The Haunted Mansion and The Country Bears, and was about $11 million off from the opening of Pirates the Caribbean: The Curse of the Black Pearl.  The movie was between Central Intelligence and Hercules for Dwayne Johnson and it was Emily Blunt’s third-biggest opening of all time, behind the two Quiet Place movies.

Old dropped to second place with $6.8 million, which is off about 59% from last weekend’s opening.  The movie has $30.7 million domestic so far and $48.9 for a worldwide total.

The Green Knight opened to third place with $6.7 million, which is strong for distributor A24 and more in its first weekend than some of their films make in their entire runs.  The Witch had a bigger opening with $8 million but The Green Knight topped other A24 releases like Midsommar and It Comes At Night.  It was also the second-highest opening for director David Lowery, with the first being his remake of Pete’s Dragon for Disney.

Black Widow and Stillwater rounded out the top 5, with Stillwater slightly underperforming against predictions with $5.18 million but it was director Tom McCarthy’s biggest opening weekend, as most of his other films start out with extremely limited releases and slowly spread wide, like Spotlight and The Visitor.

Further down the list, Snake Eyes took a massive drop of 70% from its already disappointing opening weekend, falling from second to seventh with only another $4 million, bringing it to $24.3 million total worldwide so far.  The movie cost $88 million-plus whatever advertising and other costs add, so its only potential savior is if it gets a Chinese release and, if it does, if that release is fairly large.

Jungle Cruise also took the Per Theater average as well with $8,125 in each of the 4,310 theaters it played in.