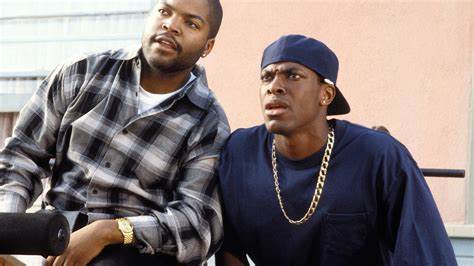 Along with featuring tracks from star Ice Cube, Cypress Hill, Scarface, and 2 Live Crew, the soundtrack for 1995’s classic Friday also featured the song “Keep Their Heads Ringin” from Dr Dre.  The song was the only single released for the Friday soundtrack and it hit #13 on the Billboard Hot 100 and topped the Hot Rap Tracks chart.  The song was certified gold in May of 1995.  Friday director F. Gary Gray directed the music video for “Keep Their Heads Ringin” and it takes a slightly different tone than the stoner comedy of the film.  The music video features more of an action/heist movie vibe that we would see later in Gray’s career with stuff like Fate of the Furious and sees Dre taking over an airport, getting air traffic controllers and bystanders to get down and playing clips from the movie over the surveillance screens.  Chris Tucker, Faizon Love, and Nia Long all make appearances in the music video.  There’s a chance you may have actually got to see the video on the big screen as New Line offered up the music video as an option to theaters before playing the movie itself.  You can check out the video below.