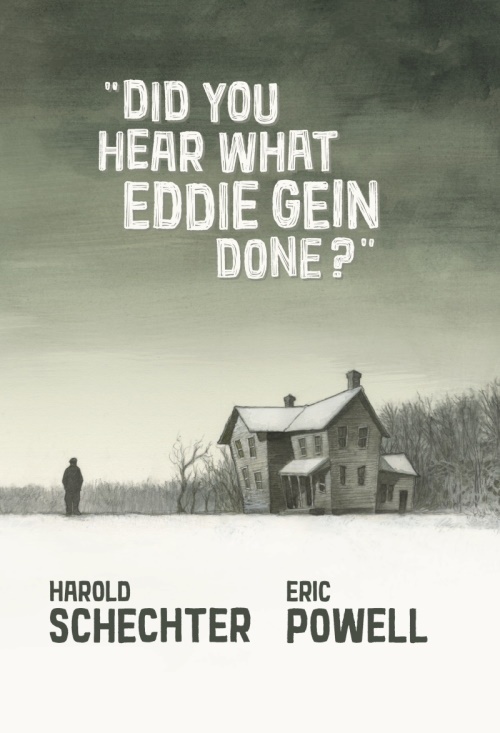 Before Hannibal Lecter, Leatherface, and Norman Bates thrilled and terrified people, there was Ed Gein. Born in rural Wisconsin, Gein was a member of his community of the farmlands that no one suspected was hiding a dark side. With a twisted relationship with his mother and a murderous obsession for mutilation, Gein had committed crimes that would be the inspiration to a few famous horror monsters. Harold Schechter and Eric Powell searched thru Ed Gein’s complex past to tell the story that grew from small-town whispers to an American legend.

While fiction conveniently builds monsters, it’s a doomed fact that some are made from ramifications far beyond their control. Born to George and Augusta Gein in 1906, Edward Theodore Gein was raised in difficult family life. George’s abuse and Augusta’s strict guidance gave Ed a troubling need to be close to his mother. The obsession grew as the years passed, eventually isolating himself with his mother. The dynamic between Ed and his mother was a deformed bond of love and hate. However, when Augusta passes away in 1945, the obsession evolves into sinister crimes.

Ed Gein was convicted of two counts of murder and grave robbing, but that did not put an end to his story. Gein was not the first serial killer in America, but his influence expanded year after year while he was in prison. The shock and nature of his crimes lead to wild speculations, false rumors, and mythos that become larger than fact. Gein’s acts of murder, cannibalism and bodily mutation would later shape the public’s perception of horror for years to come.

Did You Hear What Eddie Gein Done? is artfully told from Harold Schechter’s meticulous effort of piecing true events and dramatic flair. Schechter takes facts and fiction to deliver a clean narrative that tries to understand the man behind the madness. Eric Powell provides stellar visuals with his beautiful grey, pencil-drawn artwork setting the scenes. With only different grey tones, thick black lines, Powell creates powerful imagery that can stir disturbing states without gory details.

Fact and Fiction blend together for a thrilling read in Did You Hear What Eddie Gein Done? This graphic novel reads like a true-crime podcast and the artwork is very efficient to strike great emotional depths. This is a great read for true crime fans and should not be missed out on.

Did You Hear What Eddie Gein Done? will be released date on August 11th, 2021.