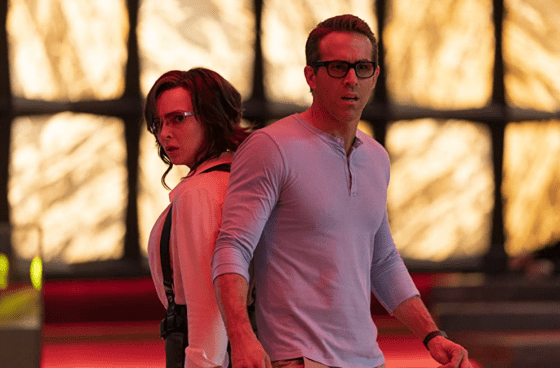 After over a year of delay thanks to the pandemic, Free Guy finally arrived this past weekend in theaters (and only theaters) and it was worth the wait as it’s a surprisingly sweet but still action-packed and funny summer blockbuster.

Ryan Reynolds stars as Guy, a bank-teller in Free City who comes to realize that there’s a hidden level of reality existing only to those people with special sunglasses.  Those “sunglasses people” are actually gamers, who are playing in the online shooter Free City, which seems mostly like a riff on GTA Online but also has elements of games like Fortnite as well.  Guy meets MolotovGirl aka Millie Rusk (Jodie Comer), who is scouring Free City looking for proof that the code for her game, Life Itself, was stolen and used illegally by the CEO of Free City’s developer Soonami, Antwan (Taika Waititi).  After leveling up by stopping crimes and helping his fellow NPCs, Guy is able to help Millie on her quest and she also gets help from her old partner, Keyes (Joe Keery), who took a low-level position at Soonami.  The story borrows elements from a number of places, including both Tron movies, but it also carves out its own identity with Guy’s journey of self-awareness and heroism.  It also has some clever commentary on the toxicity of some games through Guy’s mission to stop players from committing wanton chaos and the predatory nature of some game companies (one of the big existential threats to Free City is that Antwan is making Free City 2 but literally nothing from the first game is transferring over).  The movie does a great job of incorporating the game world, especially after Guy gets his glasses and is able to see what is actually going on and there are lots of really fun bits involving weapons and power-ups, especially some fellow Disney-owned items toward the end.  There are some things that don’t really make sense if you know how games work, like being able to code on the fly to effect changes to the game, but there are an equal or greater number of things that use the outside world to affect the game world in clever ways, like Antwan trying to wipe Guy via server reboot.

Ryan Reynolds is great as Guy and very much has the same energy that, say, Will Ferrell had in Elf or Chris Pratt as Emmett in The Lego Movie.  He’s constantly upbeat and excited about everything in an infectiously sweet way but also is able to handle complicated fights and over-the-top action and throws in some of his snarky edge at times as well.  I’ve heard of how great Jodie Comer was on Killing Eve but this is really the first thing I’ve seen her in and, yeah, she’s great.  She has her normal British accent when portraying MolotovGirl but she easily slips into an American voice and she’s one of those actresses where if you didn’t know she was British, you would assume her American voice is her natural voice.  She also has great chemistry with Reynolds and is able to easily flip back and forth between the femme fatale side of MolotovGirl and the more earnest and honest Millie.  Joe Keery is basically just doing his Steve thing from Stranger Things, but I love it there and it’s still great here.  Taika Waititi is definitely the most over-the-top character in the movie but his schtick, at least for me, landed more than it missed and he has some great ridiculous one-liners and delivery.  Lil Rel Howery and Utkarsh Ambudkar are also pretty fantastic in their supporting roles and get lots of great little moments and Lil Rel in particular also really nails the naive sweetness of the Free City NPCs as Reynolds does.  If you’re a fan of Twitch/Streaming culture, there’s also a lot of cameos from big names in that arena that helps add to the gaming culture of the movie but none of them are particularly funny or interesting.

Free Guy is a fun, funny, and surprisingly sweet summer blockbuster that offers up some actual characters that you care about alongside the over-the-top action.  Outside some minor quibbles, the movie does a fantastic job of fleshing out and exploring its video game world and it seems to be another bit of evidence that movies about games or movies that ape the feel or style of video games fare much better than trying to make an actual adaptation of a game, which almost always fails.