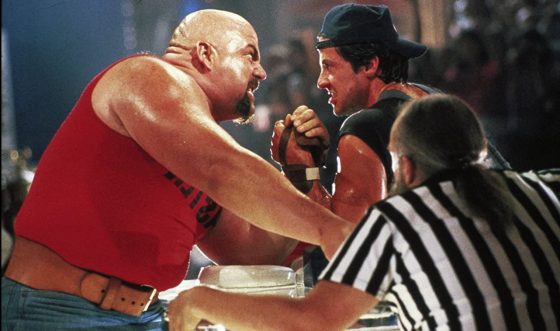 Directed by Menahem Golan himself at the peak of The Cannon Group’s power, Over the Top is a wonderfully ridiculous classic from Sylvester Stallone that took viewers into the high-stakes world of long-haul cologne trucking and arm wrestling.  Stallone is Lincoln Hawk (or Hawks depending scene), a trucker and competitive arm wrestler who is trying to win back the love of his snooty son Michael, who has been living in the lap of luxury with his mother and grandfather and attending a prestigious military academy.  Hawk’s estranged wife, who is dying of cancer in another layer of crazy drama in an already overly dramatic movie, wants Hawk to pick Michael up from school and drive him home, hoping the long road trip will help them reconnect and bond.  Hawk’s father-in-law, Jason Cutler (Robert Loggia in a deliciously scenery-chewing villain role), wants to stop this at all costs, going so far as to send goons to try and kidnap Michael while the duo is on the road.  Everything culminates with the World Armwrestling Championship in Las Vegas where Hawk competes against a slew of colorful opponents, one of whom straight-up drinks motor oil.  Stallone was paid the, at the time, exorbitant amount of $12 million to appear in the movie and Menahem Golan had the legendary Giorgio Moroder compose the score while also filling the movie with pop/rock songs from the likes of Kenny Loggins and Sammy Hagar.  The movie flopped at the box office, only making $16 million off a budget of $25 million but it’s become something of a bad/ridiculous movie cult classic, getting a commentary from Rifftrax among other things.  You can watch the entire movie below thanks to YouTube.

EA Commentary: Over the Top