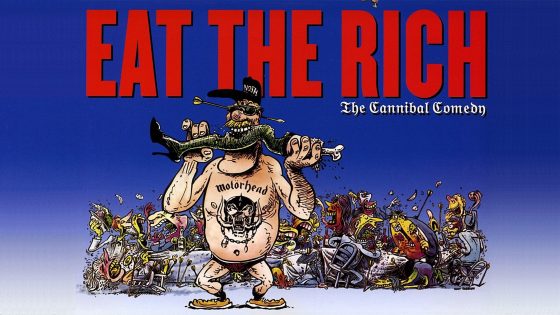 If Motörhead was going to contribute to an 80s UK comedy movie, it makes sense that it would be a pitch-black satire involving cannibalism like 1987’s Eat the Rich.  A spin-off from the popular UK comedy series, The Comic Strip Presents…, the movie follows a waiter named Alex, who is fired from the hoity-toity restaurant Bastards and forms a team of anarchists to take over the restaurant and literally serve the wealthy up as food to fellow rich people.  Lemmy appeared in the movie as Spider and Motörhead contributed 6 songs to the soundtrack, including the title song “Eat the Rich”. Motörhead guitarist Würzel also contributed a solo track “Bess” to the soundtrack.  The movie flopped and only played in four theaters in the US in 1987 and plans for another movie from The Comic Strip Presents… creator, Five Go to Hell, were shelved.  Motörhead filmed a music video for “Eat the Rich” which features them rocking on stage along with clips from the movie.  Check it out below.