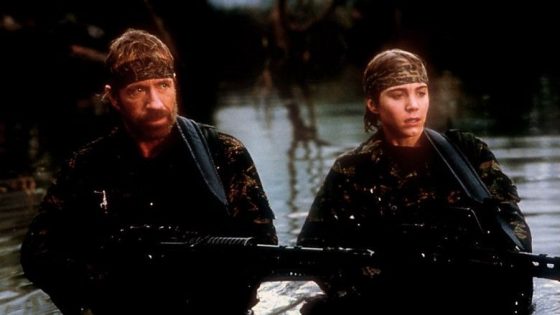 A favorite here at Everything Action, Sidekicks is a wonderfully cheesy and weird fusion of The Karate Kid and various Chuck Norris movies and you can watch the entire thing in the latest Everything Action Theater.  Coming out in 1993, the movie stars the late Jonathan Brandis as Barry Gabrewski, who suffers from asthma and is bullied by fellow students and adults like his gym teacher or Kelly Stone (Joe Piscopo), who runs the extremely Cobra Kai style dojo and rejects Barry’s attempts to join.  Barry also has constant daydreams of fighting alongside Chuck Norris that are homages to movies like Missing in Action and The Hitman.  Barry finds a Mr. Miyagi in Mr. Lee (Mako), who owns a local Chinese restaurant and is the uncle of Noreen Chan (Julia Nickson-Soul), Barry’s favorite teacher whom he has a crush on.  After training with Mr. Lee, Lee enters himself, Barry and Noreen into a local karate tournament, where they find themselves up against Kelly Stone’s dojo and one team member short.  In a shocking twist, Chuck Norris himself is attending the tournament and agrees to join the team, letting Barry fight side by side with his hero in real life.  Beau Bridges, Danica McKellar, and Richard Moll co-star.  The movie opened at #2 at the box office when it opened in April of 1993 and it made $17.1 million over its domestic run.  It was directed by Chuck’s brother Aaron Norris and produced by Jim “Mattress Mac” McIngvale,  a well-known furniture outlet owner in Houston who worked with Chuck on commercials for his stores and McIngvale put up $8 million of his own money for the project.  The entire movie is below thanks to YouTube, check it out.