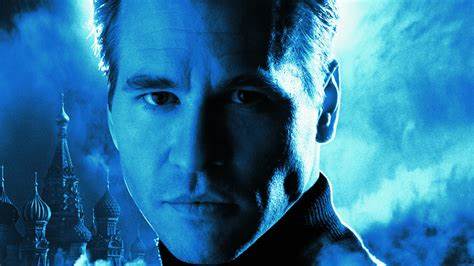 With renewed interest in him thanks to the recent Prime Video documentary and his eventual appearance in Top Gun: Maverick (if it ever gets released), it seems like a great time to feature one of our favorite Val Kilmer movies in Everything Action Theater, The Saint.  Released in 1997, The Saint was the most recent take on the Simon Templar series, which started as a series of novels that ran from 1928 to 1983 which then became movies, radio drams, a TV series starring Roger Moore in the 60s, and a TV series in the 70s starring Ian Ogilvy.  Kilmer took on the Simon Templar mantle as a master of disguise and world-class thief.  Templar is hired by a Russian oil baron, Tretiak (Rade Šerbedžija) who is trying to rally support against the Russian president. Tretiak wants Templar to steal a formula to create cold fusion from Dr. Emma Russell (Elisabeth Shue) but Templar falls for her and the two have to avoid capture and find evidence of Tretiak’s true plan.  The movie definitely let Kilmer go wild with crazy accents and characters and it has solid 90s action from director Phillip Noyce, who also directed Salt and Blind Fury.  The movie was a hit worldwide making over $169.4 million.  There’s been a reboot in development for years and the most recent news was that Rocketman director Dexter Fletcher was directing with Bridgerton star Rege-Jean Page starring as Templar but you can watch the Val Kilmer version in full below thanks to Youtube.  (and hey, you can sync up our commentary up to it if you want as well to watch along with the Everything Action crew)

Movie of the Month: The Saint