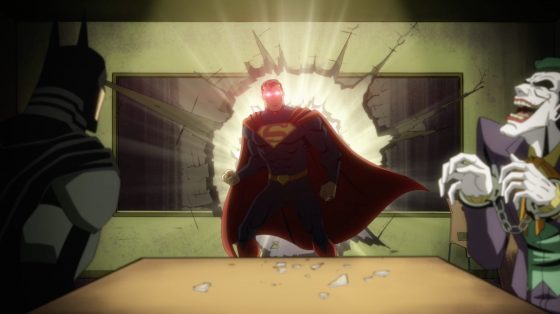 Injustice has had two fantastic games along with a comic series and toys but in October it will become the latest DC Animated Movie.  Following the plot of the original game, Superman (Justin Hartley) is devasted when The Joker (Kevin Pollack) tricks him into detonating a bomb that destroys Metropolis and kills Lois Lane (Laura Bailey) and their unborn child.  Superman kills Joker and decides to take over the planet to prevent something like that from ever happening again.  This doesn’t sit well with Batman (Anson Mount), who decides to gather a group of freedom fighters to oppose Supes and free the world from his clutches.  Janet Varney, Brandon Michael Hall, Anika Noni Rose, Yuri Lowenthal, and Gillian Jacobs co-star, and Matt Peters, who directed Justice League Dark: Apokolips War, is directing.  The movie is out on 4K Blu-Ray combo pack and Digital on October 19th and you can check out the trailer below.