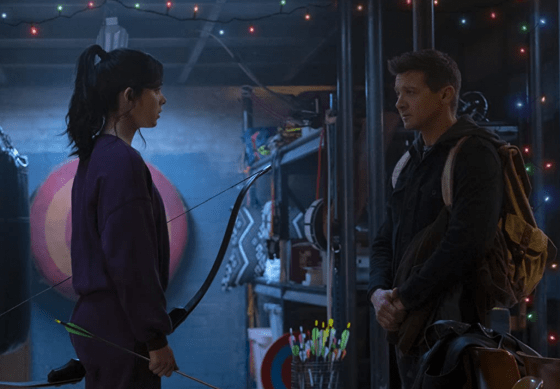 As we’re halfway through What If?, it’s time to gear up for the next Disney+ MCU series, Hawkeye.  Jeremy Renner returns as Clint Barton in a post-Endgame New York City, spending time with his family seeing things like a Captain America-themed musical.  When reports of his grim alter ego Ronin reappearing in the city pop up, Clint stays behind in the city to investigate and finds Kate Bishop (Hailee Steinfeld), a 22-year-old archery prodigy who wants to be a superhero.  Kate and Clint team up to battle across New York when a threat from Clint’s past reemerges and he’s doing it all while trying to be home for Christmas.  It all feels a bit Shane Blackesque and Hailee Steinfeld seems like a charmingly dorky Kate in the vein of Mary Elizabeth Winstead’s Huntress from Birds of Prey.  The Hawkeyes also meet Echo (Alaqua Cox), a Native American who, while deaf, can perfectly copy people’s movements a la Taskmaster and Florence Pugh is supposed to reprise her role of Yelena Belova as well.  Vera Farmiga, Fra Fee, Tony Dalton, Zahn McClarnon, and Brian D’Arcy James co-star with Mad Men’s Jonathan Igla as show creator.  The series debuts on November 24th and you can check out the trailer below.