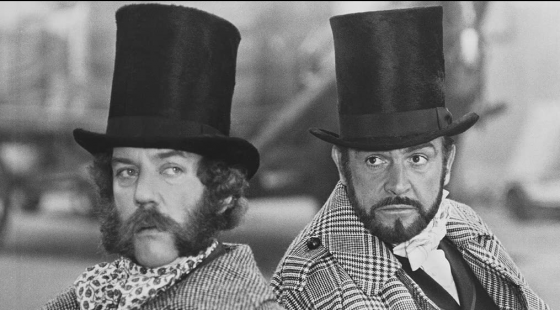 After directing Westworld and Coma, Michael Crichton wrote and directed the adaptation of his novel The Great Train Robbery, inspired by the Great Gold Robbery of 1855 that took place in England.  Sean Connery stars as master thief Edward Pierce, who plots to rob a massive shipment of gold that is transported monthly from London as payment to the British troops fighting in the Crimean War.  Pierce enlists Robert Agar (Donald Sutherland), a proficient pickpocket and safecracker along with his mistress Miriam (Lesley-Anne Downe) and his driver Barlow (George Downing).  The steps needed to pull off the heist are seemingly impossible, including getting copies of four keys that are necessary to unlock the safe and figure out a way to steal the gold while the train is in motion, something which has never been done in the history of robbery up that point.  The movie is an extremely fun heist movie with all the twists and turns you would expect with the added detail of the Victorian England setting which requires different heist techniques and technology and there’s a fantastic finale with the heist from the train, where Sean Connery actually did most of his own stunts, including an extended sequence moving across the top of a moving train.  The movie received mostly strong reviews at the time of its release in 1978 and made just over $13 million at the box office.  You can check out the entire movie below thanks to YouTube.