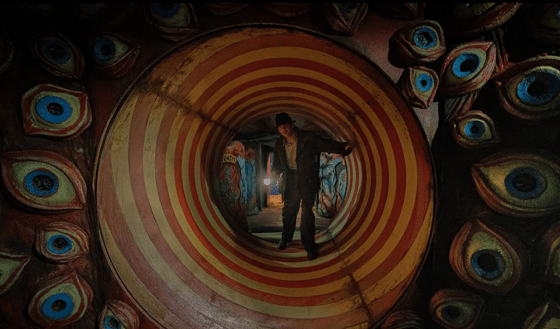 It’s been 4 years since the Academy Award-winning Shape of Water hit theaters but Guillermo Del Toro is finally back behind the camera with Nightmare Alley.  Based on the novel by William Lindsay Gresham from 1946, which was previously turned into a film in 1947, Nightmare Alley stars Bradley Cooper as ambitious carny Stan Carlisle.  He has a gift for being able to manipulate people and hooks up with a psychiatrist, Dr. Lilith Ritter (Cate Blanchett), who is even more ambitious and dangerous than he is.  Rooney Mara, Ron Perlman, Toni Collette, David Strathairn, Holt McCallany, Tim Blake Nelson, Willem Dafoe, Richard Jenkins, Clifton Collins Jr, and Mary Steenbergen co-star and Del Toro wrote and produced the movie as well.  According to Del Toro, this is a departure from his other work as there are no supernatural elements and it’s a dark noir story that he’s been wanting to make since Ron Perlman gifted him the original novel in the 90s.  The movie is out in theaters on December 17th and you can check out the trailer below.

Bradley Cooper is a Shady Medium in Nightmare Alley (Trailer)