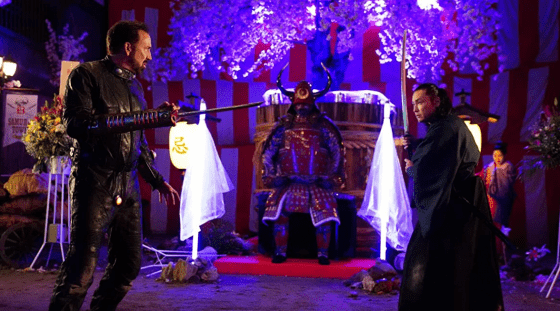 Fans of Nicolas Cage were hyped for the recent release of Prisoners of the Ghostland, which was described by the man himself as “one of the wildest movies I’ve ever done”.  The final product is definitely wild and weird and if you enjoyed other recent Cage movies like Mandy, you’ll probably dig this one as well.

Cage plays Hero, a bank robber who has been rotting away in the jail of Samurai Town since being arrested following a botched heist that led to multiple civilians getting gunned down.  The shady Governor of Samurai Town, played by Bill Moseley, gets Hero out of jail with a deal, head into the barren Ghostland and find his “grandaughter” Bernice (Sofia Boutella) and bring her back within 5 days or else the leather jumpsuit he gets forced into will detonate with bombs at his neck, arms, and testicles.  Hero takes the deal but finds the Ghostland full of bizarre and deranged denizens and that they are seemingly trapped in this bizarre realm with no way out.  The plot is fairly straightforward but it’s layered with lots of weirdness and dream/nightmare-like imagery.  There’s tons of time and clock imagery from the literal countdown on Nic Cage’s suit to the citizens of the Ghostland holding back the arms of a clocktower with rope to everyone in Samurai Town just randomly starting to sing “Grandfather’s Clock”.  This is one of those movies where you just have to give in to the vibe and wavelength of the movie and you’ll probably know fairly quickly if you are or not.  The movie does a great job of fully committing to its bizarre world, especially with the sets and costumes.  Samurai Town is a literal mish-mash of feudal and modern Japan mixed with rowdy American Wild West frontier trappings and everyone is either a full-on samurai or a cowboy.  It’s sort of similar in a way to Mad Max: Fury Road, where the world is extremely bizarre but also lived in and full of traditions, clothing, and ways of life that are normal for the characters living in it, possibly with the exception of Nicolas Cage who exists on his own private wavelength.  There are some plot points that I feel can’t be explained away by the bizarreness of the tone, however.  There seems to be a redemption arc building for The Governor’s main bodyguard, Yasujiro (Tak Sakaguchi), that doesn’t fully come together and there’s also a big deal made about the Ghostland rallying together and slapping together a fleet of Dekotora trucks and cars to finally escape and take on The Governor but that also ends super abruptly and Cage and Boutella head back to town alone for the final confrontation.

The last Nicolas Cage movie I watched was Willy’s Wonderland, which should have been a home run of Cage craziness but it made the baffling choice to make Cage mute for the entire movie.  Prisoners of the Ghostland proves even more so how insane that choice was because here you get some prime Cage freakouts, including a truly ridiculous motivational speech to the citizens of the Ghostland that includes him screaming “My TESTICLE!!!!!!!!!!!!!” at the top of his lungs and scenes where he’s fighting and literally saying “Karate Chop!” as he hits guys.  If you’re into Gonzo Nic Cage, you’ve got it here.  Bill Moseley is definitely able to hang with Cage in the weird and crazy department and he plays The Governor like a creepy Col. Sanders, dressed in a full white suit and a ridiculous Southern accent.  Tak Sakaguchi feels like he’s in a Kurosawa movie complete with great sword fights but his performance, while excellent, clashes with the bonkers nightmare vibe of the rest of the movie and, as mentioned before, his arc comes to a strange and abrupt end that feels at odds with the setup earlier in the movie.  Sofia Boutella is fine and even gets a bit of action at the end with a sword and guns.

Prisoners of the Ghostland is a bonkers genre mashup that will most likely fully entertain Nic Cage fans who love it when he goes fully over the top and if you enjoyed stuff like Mandy previously, you’ll probably dig this.  The world of Ghostland is interesting and well-realized from the American/Japanese mish-mash of Samurai Town to the apocalyptic loony bin of the Ghostland itself.  It’s in limited theaters right now but you can also get on VOD/Digital and check it out at home.