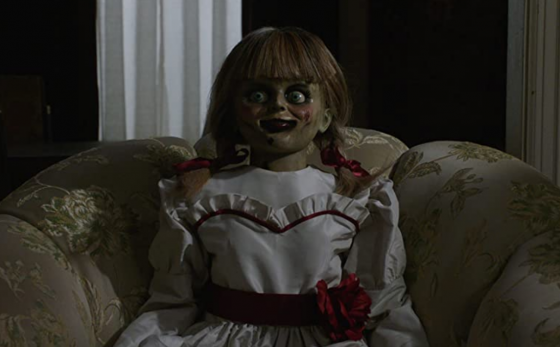 Name: Malthus, a demon, residing inside the doll Annabelle

Origins: Dollmaker Samuel Mullins and his wife Esther are devasted when their young daughter Annabelle, aka Bee, is killed in an accident alongside the road.  Grief-stricken, they are susceptible to the demon Malthus, who poses as Bee’s spirit and possesses the porcelain doll that Samuel had made for Annabelle.  Malthus/Annabelle terrorizes a group of orphans that take shelter at the Mullins house 12 years after the original possession and eventually possesses a young girl named Janice, who begins to call herself Annabelle and forms a cult called The Disciples of the Ram.  Janice/Annabelle eventually attacks her next-door neighbors, Mia and John Form and Janice/Annabelle kills herself to put Malthus back into the doll, with Malthus planned on possessing Mia’s daughter, Leah.  Malthus fails and the Annabelle doll with his soul trapped inside is eventually captured and contained by Ed and Lorraine Warren.

Powers: Possession, mind control and illusions, telekinesis, can act as a “conduit” and bring other demonic entities into our world

Weapon(s) of Choice: Mind-controlled/possessed victims or other demonic entities