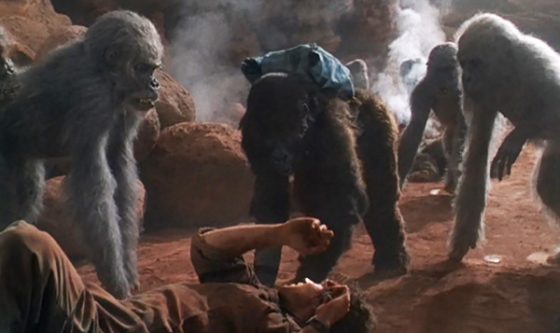 Coming out two years after Jurassic Park, Paramount was hoping that another Michael Crichton adaptation would be just as big as that Steven Spielberg classic but Congo was not quite as well-received, although it has found a cult audience in recent years.  Starring Dylan Walsh, Laura Linney, Tim Curry, and Ernie Hudson, the movie follows an expedition into the jungles of the Congo with Laura Linney’s Karen Ross looking to find out what happened to the last expedition her company TraviCom sent looking for rare blue diamonds that could revolutionize communications and Dylan Walsh’s Peter Elliott offering up his expertise on gorillas and specifically trying to get his gorilla Amy, who has learned sign language and can communicate with a special wrist device, home.  Tim Curry is wonderfully over the top as always as the slimy Homolka, who has searched for the Lost City of Zinj, the location of the blue diamond mine, for his entire life and Ernie Hudson is the group’s suave guide, Monroe Kelly.  The movie was directed by long-time Lucasfilm producer Frank Marshall with a script by critically acclaimed playwright and author John Patrick Shanley.  The movie got a massive marketing push, including a pinball machine, an surprisingly awesome toy line (at least the gorilla figures in it), and even the beloved Taco Bell item the Volcano Taco, which debuted alongside the movie.  While the critical reception was not good, the movie did make over $152 million worldwide and there’s a number of fans now who love the more campy aspects of the movie, like the laser-filled finale, the ridiculous animatronics for Amy, and just about everything Tim Curry does.  You can check out the entire movie below thanks to YouTube.