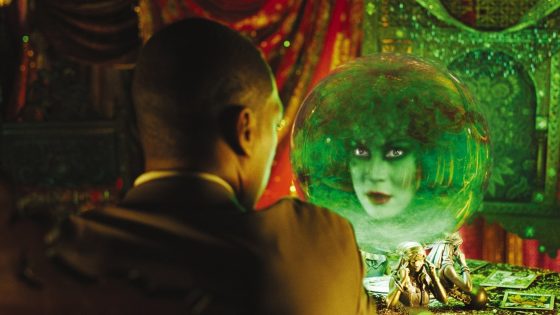 Coming out the same year as Pirates of the Caribbean: The Curse of the Black Pearl in 2003, The Haunted Mansion starring Eddie Murphy was not quite the hit that its fellow theme park ride adaptation was.  The movie actually shares more similarities to Disneyland Paris’ Phantom Manor, which has a similar plot to the movie about lost love and a ghostly bride but it also has many of the elements that people love about the original versions of the ride in the US, like Madame Leota (played by Jennifer Tilly), some of the settings like the graveyard and the use of songs like “Grim Grinning Ghosts”  Along with the music from the ride, the movie also had a cover of Stevie Wonder’s classic “Superstition”, performed by Disney star Raven-Symoné.  Despite co-starring with Murphy in Doctor Dolittle 1 and 2 previously, Raven did not appear in The Haunted Mansion as an actor, only contributing “Superstition” to the soundtrack and appearing in the music video, which finds Raven and her friends heading to a party at the mansion and having spooky things start happening.  It’s a very “early 2000s pop” spin on the Stevie Wonder classic and you can check out the music video below.