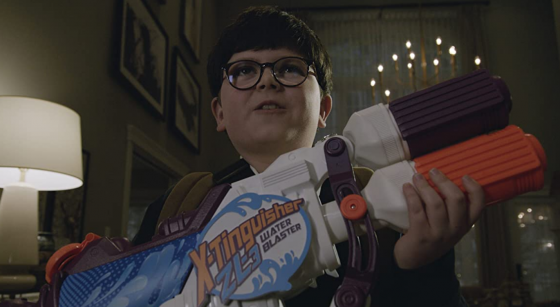 Outside of the first two movies, the Home Alone series is a hellscape of terribleness but Disney is hoping they can reboot the franchise and capture some of the magic of the original with the Disney+ original movie, Home Sweet Home Alone.  Following the same premise (and seemingly some of the exact same beats and quotes) as the original movie, Archie Yates as Max Mercer, whose family leaves for a trip to Japan but he’s left behind.  A married pair of crooks (Ellie Kemper and Rob Delaney) have been casing the Mercer home looking to steal an expensive heirloom inside but Max devises a series of traps and weapons to keep them out and defend his home.  Pete Holmes, Chris Parnell, Aisling Bea, Ally Maki, Kenan Thompson, Timothy Simons, Mikey Day, and Andy Daly co-star with Macauley Culkin and David Ratray appearing in cameos as Kevin and Buzz McCallister respectively. Dan Mazer, a long-time collaborator with Sacha Baron Cohen who helped create Borat, Bruno, and Ali G, is directing the movie.  The movie will debut on “Disney+ Day, November 12th, and you can check out the trailer below.