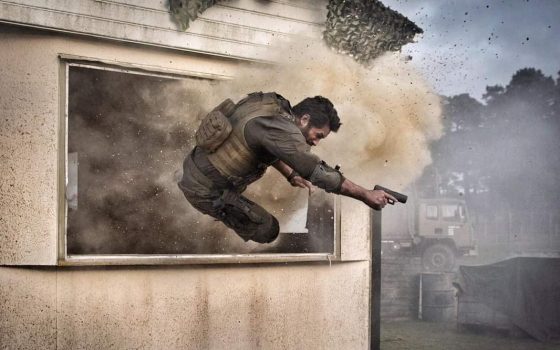 Scott Adkins is no stranger to one-take action sequences, like the fantastic sequence toward the end of Universal Soldier: Day of Reckoning but he and director James Nunn are taking things to the next level with One Shot, where the entire movie is one continuous take and in real-time.  Adkins plays Jake Harris, who arrives with his Navy SEAL team and CIA analyst Zoe Anderson (Ashley Greene) to retrieve a prisoner from a CIA black site to try and get information that could prevent an attack on Washington DC.  The site’s manager, Yorke (Ryan Phillippe), refuses to cooperate but the point is moot when a group of terrorists attacks the site and the group is forced to work together and defend the base.  Obviously, the trailer doesn’t really give a good sense of what the actual movie will feel like since it’s edited and chopped up but if it can deliver on the promise of a badass Scott Adkins movie that never cuts (or at least hides cuts well), it could be something special.  The movie is in theaters and On Demand on November 5th and you can check out the trailer below.