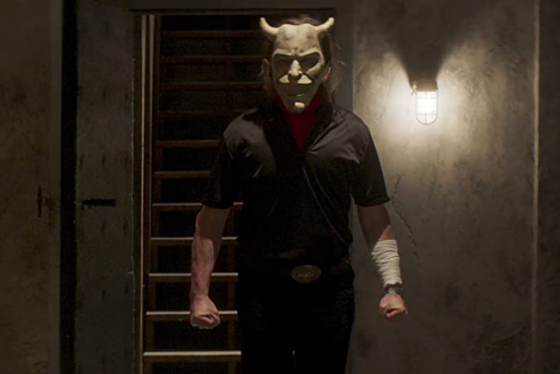 Ethan Hawke is usually always doing something interesting on film and he’s playing some creepy villains (and the twin brother of one) in the upcoming movies The Black Phone and Zeros and Ones.  The Black Phone is definitely the bigger of the two movies and the highly anticipated reunion of Hawke and director Scott Derrickson, who previously teamed for Sinister.  The Black Phone is based on a story by Joe Hill and sees Hawke as a villainous child killer called The Grabber whose latest victim is a boy named Finney (Mason Thames).  Finney finds an old phone in the room he’s being kept in that doesn’t seem hooked up but it starts ringing and he’s able to talk to the spirits of former victims of The Grabber, who try to help Finney figure out a way to escape.  Meanwhile, Finney’s sister Gwen (Madeleine McGraw) is having dreams about where Finney is being kept and tries to get enough info for the police to find Finney and stop The Grabber.  The movie is out on February 4th next year and you can check out the trailer below.

The other upcoming Hawke movie is arriving much sooner on November 19th with Zeros and Ones.  Hawke is in a dual role of a soldier named Jericho who is after his twin brother, a violent terrorist anarchist who is potentially responsible for blowing up the Vatican in a post-apocalyptic/wartorn Rome, Italy.  The movie was directed Abel Ferrara, who previously directed movies like Bad Lieutenant (the Harvey Keitel version) and King of New York.  Zeros and Ones will in select theaters, VOD and On Demand and you can check out that trailer below.

Tom Hanks Goes on a Post-Apocalyptic Journey in Finch (Trailer)

The MCU Gets Weirder with Doctor Strange (Trailer)