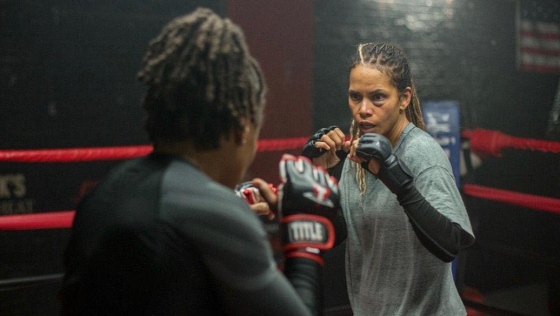 Halle Berry makes her directorial debut and stars in the upcoming Netflix sports drama, Bruised.  Berry plays Jackie Justice, a former MMA star who left the sport in disgrace.  Dragged into an underground fight by her boyfriend Desi (Adan Canto), she catches the attention of a promoter (Shamier Anderson) who offers Jackie a second chance to enter the octagon and become a respected fighter again.  While training for her redemption fight, Jackie also has the son she gave up as an infant return to her life, played Danny Boyd Jr.  It looks very Rocky but also probably some Creed and Warrior thrown in there as well but it seems like a solid sports drama with some strong looking directing from Berry and a strong performance in front of the camera as well.  Bruised is out on Netflix on November 24th and you can check out the trailer below.