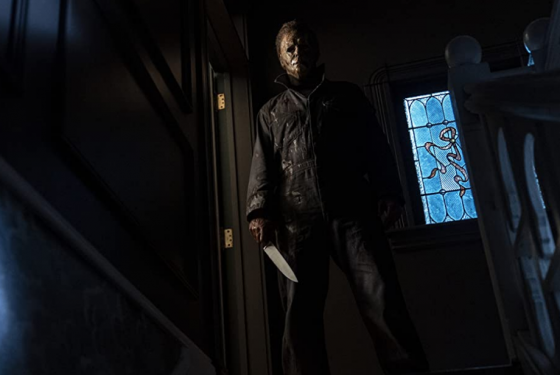 Halloween Kills slashed Bond and the rest of the competition at the box office this past weekend to take the #1 spot on the charts.

Halloween Kills opened to $49.4 million, which is the second-best opening weekend for the franchise behind the 2018 movie.  It is down pretty significantly from the first movie but the 2018 movie didn’t have the current pandemic conditions to deal with or a day and date release on Peacock, which Kills did.  It’s not clear how many people stayed home and watch the movie on Peacock and sources like Samba TV don’t have any numbers either.  The movie was still way ahead of expectations and predictions, so it’s more good news at the box office following the phenomenal opening of Venom: Let There Be Carnage and the solid opening of No Time to Die.

No Time to Die dropped to second place with $24.2 million, dropping about 56% from last weekend’s opening.  The movie has $99.4 million domestic so far for two weeks out and just over $447 million worldwide, making it the sixth highest-grossing film worldwide for 2021.

Venom: Let There Be Carnage went to third place with another $16.5 million, bringing it to just over $168 million domestic and $283.6 million worldwide.  Its domestic total puts it at #4 for the 2021 domestic chart and it’s just outside the top 10 for the worldwide charts at #11 behind A Quiet Place Part II.

The Addams Family 2 and The Last Duel rounded out the top 5 with the latter opening with a disappointing $4.8 million.  It’s one of Ridley Scott’s lowest openings between All the Money in the World and Legend and also just slightly below The Counselor for other recent Scott movies.

Further down the list, A24’s Lamb added 282 new theaters and stayed in eighth place with another $543,004, bringing it to just over $2 million domestically.

Halloween Kills also took the Per Theater average with $13,335 in each of the 3,705 theaters it played in over the weekend.