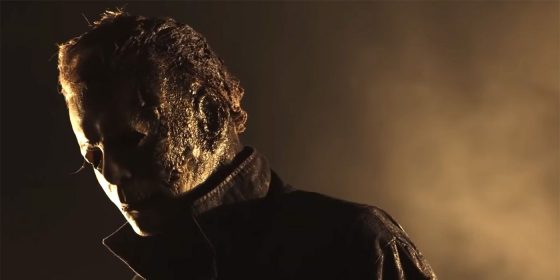 If you saw Halloween Kills this past weekend, you probably heard “Hunter’s Moon” from Swedish hard rock/heavy metal group Ghost on the soundtrack.  The song is the first new single from the band since 2019 and the first original song released from the band as they’ve been building up to a fifth album.  Blumhouse vice president of film development Ryan Turek attended a Ghost show in Los Angeles in 2018 and became friends with the band’s founder and lead singer, Tobias Forge, which led to Forge meeting with Halloween Kills director David Gordon Green and developing “Hunter’s Moon” for the soundtrack.  Forge leads the band as the character Papa Emeritus IV, the fourth incarnation of his Satanic priest character (he was also briefly a character named Cardinal Copia) and he appears throughout the music video for the song and briefly at the end of the video there is a Michael Myer’s mask visible next to him but a different, equally creepy, masked character is featured throughout the rest of the video.  The band’s fifth album is expected sometime soon and they plan on touring the US starting early next year.  Check out the music video for “Hunter’s Moon” below.