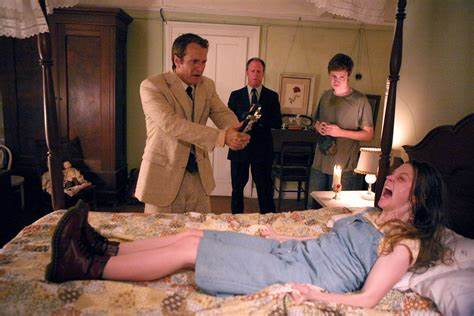 The found-footage subgenre of horror has delivered a bunch of classics like The Blair Witch, REC, Paranormal Activity, and more. There’s also a ton of schlock and trash and it seemed like possibly The Last Exorcism from 2010 was just going to be one of those lame, rushed cash-ins but it turned into something much more original and interesting than a lot of other movies coming out around the same time.  Better Call Saul’s Patrick Fabian plays Rev. Cotton Marcus, who lost his faith years ago and now performs fake “exorcisms” in an attempt to debunk the entire notion and treat what he believes is actually just mental illness.  Ha agrees to have a camera crew follow him around and he takes a new case, which he has decided will be his final one, where a girl named Nell Sweetzer (Ashley Bell) is believed to be possessed by a demon.  Marcus initially believes that it’s just another case of a mentally ill person claiming they are possessed but the evidence begins to stack up that this might be the first case he’s dealt with where demonic forces are actually involved.  The movie was critically well-received and made a ton of money, grossing over $67 million worldwide off a budget of $1.8 million.  A sequel was made three years which brought back Ashley Bell and while it still made money, it was nowhere near as well-received as the first movie.  You can check out The Last Exorcism below thanks to YouTube.

Everything Action Theater: The Losers