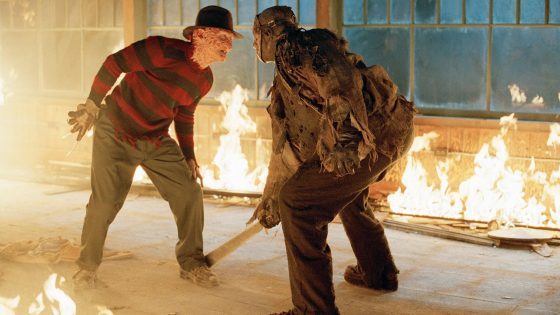 Both Freddy and Jason have long histories with rock and metal music from Dokken to Alice Cooper to the Goo Goo Dolls but 2003’s Freddy vs Jason came out firmly in the time of Nu Metal, so the lead single off the movie’s soundtrack came from Ill Niño, “How Can I Live”, which also played over the movie’s credits.  The Freddy vs Jason soundtrack was full of hard rock and nu-metal from the likes of Killswitch Engage, Seether, Stone Sour, Sevendust, Hatebreed, Slipknot, and more but “How Can I Live” was the soundtrack’s only single, which reached #26 on the Billboard Mainstream Rock charts.  The song was also the lead single for Ill Niño’s second album, Confession, which came out a month before Freddy vs Jason.  Unlike past Freddy music videos, while the action does take place on Elm St., there’s unfortunately not a cameo from Freddy himself and there doesn’t seem to be anything related to Jason and it’s mostly just the band rocking in a garage while a young woman wanders through a nightmare.  You can check out the video below.