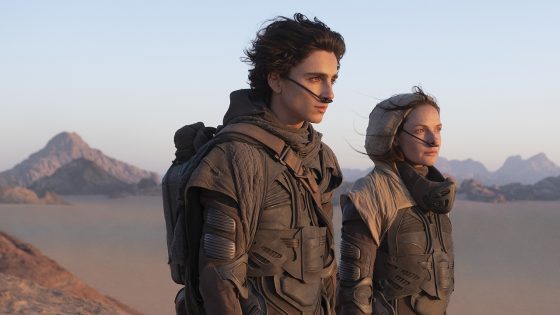 Although he’s got other genres in his filmography, Denis Villeneuve has emerged as one of our greatest current sci-fi directors and his new take on Frank Herbert’s epic Dune is easily one of his biggest and most visually spectacular movies to date.

The plot of Dune is notoriously dense and complicated but one of the biggest strengths of this new film version is streamlining it enough that most audiences should be able to keep track of most political machinations and characters.  If you watched and were able to follow Game of Thrones, you shouldn’t have trouble keeping up with Dune and its various houses.  The general rundown is that the planet Arrakis, while an almost inhospitable desert wasteland, is also the only source in the galaxy for melange or “spice” that, among other things, allows intergalactic space travel to be possible, so it’s the most valuable substance in the universe.  The noble House Atreides accepts the position to take over Arrakis and oversee spice production but their assignment is actually a devious plot between the intergalactic Emperor and the ruthless House Harkonnen, who previously ran Arrakis in a brutal reign.  Timothée Chalamet stars as Paul Atreides, the heir to the Dukedom and also possibly the long-prophesied Kwisatz Haderach, a messiah-like being who possesses highly advanced mental and physical abilities.  There’s lots of lore and terminology that goes mostly unexplained or expected to be grasped via context, which may be slightly confusing but it’s also better than endless exposition dumps and voiceover like David Lynch’s take on Dune, which also infamously came with a pamphlet at theaters to explain things even further to 80s audiences.  One aspect of the plot that is a result of this overtly being only the first part of a grander story is that the movie just kind of ends.  There’s not really a sense of conclusion or having a story that can stand alone, this is just the beginning of a multipart saga and it’s currently incomplete but hopefully, a stronger than expected domestic box office opening and massive HBO Max viewership will get the sequel on track soon.  The fact that more is to come also contributes to some of the characters not really having much to do or are just set up for future stories in the next chapter.  Dave Bautista specifically has almost nothing to do so far as the main heavy of the Harkonnen forces, Glossu Raban, and he doesn’t even really get any cool action like, say, his See co-star Jason Momoa, who gets multiple cool fight scenes and brings his swaggering charisma to the extremely likable Duncan Idaho.  Javier Bardem and Zendaya also really only factor into the last few minutes and are clearly going to be major characters going forward.  Even if they don’t have a lot of screen time, everyone is doing a fantastic job and the movie is full of heavy hitters doing great work, like Josh Brolin, Oscar Isaac, Stellan Skarsgard, and more.  Rebecca Ferguson is excellent as always as Lady Jessica, Paul’s mother who is also a member of the mysterious and powerful Bene Gesserit sisters and she does a great job of balancing her dedication to that sect and her love for her family, like when she’s forced to have Paul take a deadly test to see how in control of his mental powers he is.  Timothée Chalamet also does a solid job in the lead as Paul and as his powers grow and circumstances grow grimmer, he becomes a more determined and capable warrior and potential leader.

With Arrival and Blade Runner 2049, Denis Villeneuve showed an astounding sense of scale, production design and special effects and Dune is easily his magnum opus so far.  Everything about the costume designs, sets, ships, and creatures is jaw-dropping in its look and execution and the worlds of Dune are gorgeously realized.  There’s also incredible set pieces that the 80s version could never even have dreamed of, like a rescue of a spice harvester crew before a sandworm devours them and all the fights and battles that involve the personal shields of the world that gives a dynamic visual element to all the combat as you see all the blows that are blocked until the one blow that turns red and connects for the killing blow.  The visuals also combine with Hans Zimmer’s new, excellent score, which sounds like nothing else he’s done before and adds to the epic scale and scope of the movie.

Dune is a visual spectacle that also makes Frank Herbert’s epic the most approachable it’s ever been and lets you follow the various political machinations and characters without getting lost in endless insane jargon and without tons of exposition or voice-over explaining everything.  It trusts the audience to follow along and if you do, you’ll get interesting characters, spectacular set pieces, and stunning visuals and hopefully, there’s much more Dune on the way.