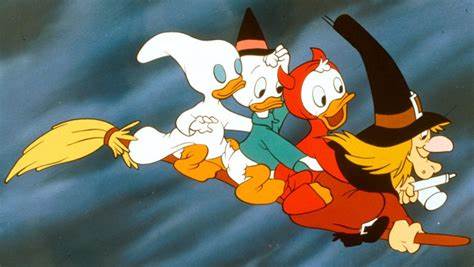 We’ve got another classic Disney Halloween short in the Everything Action Theater this week with 1952’s Trick or Treat, starring Donald Duck.  Donald is in peak asshole form at the beginning of the sketch as he pranks Huey, Dewey, and Louie by giving them lit firecrackers instead of candy and then dumping a bucket of water on their heads.  The nephews get some help from Witch Hazel who helps the boys get Halloween justice on Donald by animating the furniture and Halloween decorations around his house and hexing his feet so that she can control him and make him do all sorts of insane things, including forcing him to break open the cabinet where the boys’ candy loot is being kept.  Clarence Nash voiced all the ducks while the legendary June Foray voiced Witch Hazel, a character she also played across the aisle for Looney Tunes in shorts like “Broom-stick Bugs”, although the character was drastically different visually.  Trick or Treat is available to watch on Disney+ but you can also watch it below thanks the YouTube.

Everything Action Theater: The Stuff