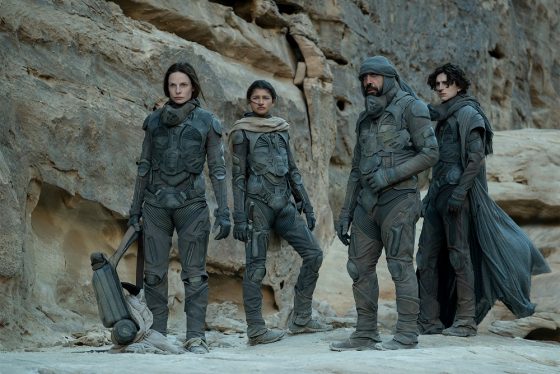 Dune managed to stay at the top of the box office for the final weekend of October 2021, although the lure of Halloween plus tons of new options on streaming platforms at home brought the overall box office down from predictions going into the weekend.

Dune took in another $15.5 million, which is a 62% drop from last week’s opening.  The sequel is already greenlit, so anxiety about Dune’s box office performance should be alleviated.  Dune has $69.4 million so far for a domestic total and just over $292 million worldwide.

Halloween Kills stayed in second place with another $8.7 million, bringing it to $85.8 million domestic and $115.3 million worldwide.  It only dropped 39% from last weekend and it was probably helped by the holiday that shares its name as an option for folks looking for scares at the box office.  It’s currently the second highest-grossing Halloween movie in the franchise, behind 2018’s reboot/sequel.

No Time to Die remained in third with $7.7 million, bringing it to $133.2 million domestic and just under $605 million worldwide and it’s currently the fifth highest-grossing film worldwide for 2021.

My Hero Acadamia: World Heroes’ Mission opened to fourth place with $6.4 million.  It currently has $34.3 million worldwide and, while it’s not as big an opening as Dragonball Super: Broly or Demon Slayer: Mugen Train, it still shows that anime movies are a strong contender in the modern theatrical landscape domestically.

Venom: Let There Be Carnage rounded out the top 5 with another $5.7 million, bringing it to $190.4 million domestic and $395.8 million worldwide.

The French Dispatch fell one slot from ninth to tenth even though it expanded to 788 theaters and took in $2.7 million.  The Last Duel, which opened poorly three weeks ago, fell out of the top 10 and didn’t even make $1 million in its third weekend of release.

The Souvenir Part II, an A24 release, took the Per Theater average with $8,828 in each of the three theaters it played in over the weekend.