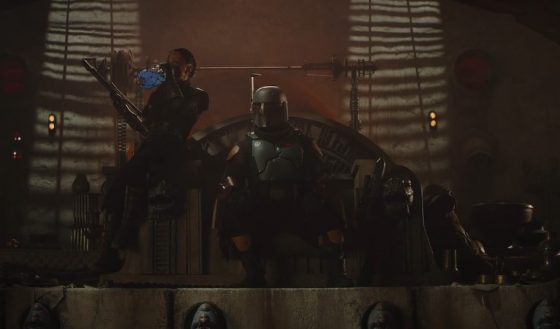 As teased at the end of The Mandalorian Season 2, Boba Fett (Temeura Morrison) returned to Tatooine, disposed of Jabba’s former majordomo Bib Fortuna and took over Jabba’s former palace, looking to establish himself as a major criminal underworld figure with Fennec Shand (Ming-Na Wen) at his side as an enforcer/assassin.  As 2021 come to a close, we’ll see how Boba will build up his new criminal empire when The Book of Boba Fett debuts on Disney+ on December 29th.  Gathering up Jabba’s former lieutenants, Boba proposes a criminal corporation run by respect and not fear but there are rival groups looking to take down the fledging kingpin and shady characters everywhere.  Having directed the awesome Mandalorian episode where Boba made his triumphant return, Robert Rodriguez returns for multiple episodes of The Book of Boba Fett alongside Mandalorian vets Bryce Dallas Howard and Dave Filoni and Rodriguez, Filoni, Jon Favreau and Kathleen Kennedy are the show’s executive producers.  Temeura Morrison was fantastic on The Mandalorian and there it seems like the awesomeness will continue on The Book of Boba Fett.  Check out the trailer below.