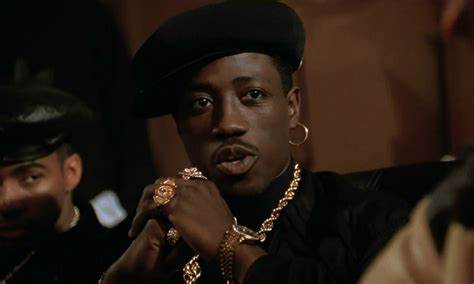 Coming out in 1991, New Jack City was basically Scarface for the early 90s (going so far as to have scenes from the 80s classic in the movie), substituting cocaine for crack but following the same rise and fall of a kingpin, Nino Brown, played by Wesley Snipes.  Firmly set in its time period, from the setting to the clothing, the music was also an important piece of the movie as well.  Rap and R&B stars Ice-T and Christopher Williams co-starred and Flavor Flav had a cameo as the DJ of a nightclub that Nino frequents.  The soundtrack for the movie was a huge hit, going platinum in the US and reaching #1 on the R&B charts and #2 on the overall album charts and, if you couldn’t guess based on the title of the movie, leaned into the New Jack Swing genre along with Rap and R&B.  Ice-T, even though in the film he was a cop up against Nino Brown, provided Nino’s theme song, “New Jack Hustler” while Christopher Williams performed “I’m Dreamin”.  There was also the song “(There You Go) Tellin’ Me No Again” by Keith Sweat and the cheesiness of Color Me Badd with “I Wanna Sex You Up”.  “I’m Dreamin” and “I Wanna Sex You Up” were the two biggest hits from the soundtrack when they were released as singles along with a medley “For the Love of Money / Living for the City” by Troop and Levert ft. Queen Latifah.  Check out some of the songs off the New Jack City soundtrack below.