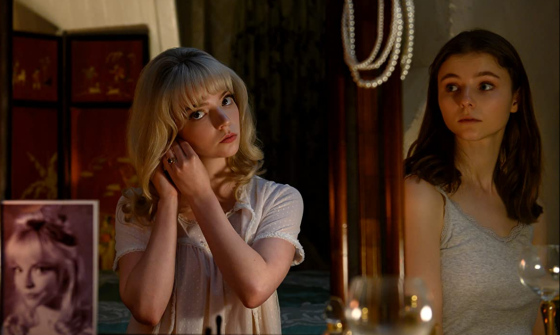 Edgar Wright is one of my favorite directors with Shaun of the Dead, Hot Fuzz, and Scott Pilgrim ranking up among my favorite films of all time.  Last Night in Soho doesn’t quite reach the heights of those movies but it’s an extremely interesting departure from some of his stylistic trademarks and tone but still oozes with gorgeous imagery and a solid horror mystery.

Thomasin McKenzie plays Ellie Turner, an aspiring fashion designer who developed a love of the 60s from her grandmother and heads from her small country home to London’s West End to attend a fashion design school.  After experiencing some cultural whiplash her first night when her style and personality clashes with most of the other students in her living quarters, especially her mean girl roommate Jocasta, Ellie sees and ad and moves to a small room in an older building run by Ms. Collins (Diana Rigg in her final performance).  Already having the ability to seemingly see spirits, mostly her dead mother, Ellie begins to have visions every night while she’s asleep of Sandie (Anya Taylor-Joy), a young woman in the 60s who aspires to be a singer in a nightclub.  At first, entranced by her visions, Ellie draws design inspiration from her visions and changes her look to match Sandie’s but the visions begin to grow darker and more disturbing, pushing Ellie closer and closer to the edge.  One thing I wasn’t expecting about Last Night in Soho is that it’s a bit of a slow burn and it takes a while for the visions and their effect on Ellie to reach a more horrific tone and most of the first half of the movie is just slowly revealing Sandie’s backstory and following Ellie’s personal life.  I was expecting things to get crazier and more horrific much sooner and I also thought that there was going to be more of a melding of the past and present like Ellie and Sandie were going to start interacting or Ellie was going to somehow affect the past but nothing like that ever happens. There is some stuff early on where it seems like Ellie is inhabiting Sandie’s body in the past like she gets a hickey after an early vision of Sandie making out with her “manager” Jack (Matt Smith), but there’s never a clear ruleset about how Ellie is experiencing the past and how much of it she’s just observing and how much she’s physically experiencing and it makes things a little confusing and hard to figure out what the stakes are later on when the visions get darker and scarier.  Some of my expectations are more at the feet of the trailers and the actual movie is fine and the unraveling mystery, while slow, is interesting to follow and the slowly creeping horror is done effectively.  It all builds to a pretty fantastic reveal and climax and if you’re looking for a more psychological horror movie, Last Night in Soho will most likely satisfy you.

Acting-wise, both Thomasin McKenzie and Anya Taylor-Joy are great with McKenzie in particular shouldering the bulk of the movie and giving Ellie a vulnerability that makes you care and worry about what’s happening to her.  She also has excellent freaked-out and scared reactions that work excellently when horrific things start to happen.  Taylor-Joy starts out exuding confidence and beauty that you can see why Ellie becomes obsessed with it but she does a great job of showing the dark and sad descent of her character as the movie goes on.  Matt Smith does a great job as the nefarious Jack but he’s a bit of a one-note abusive creep and Terrence Stamp, as a character in the present who may have ties to what happened in the 60s, also feels a bit wasted and there’s lots of mystery and build-up about who his character is and what he wants with Ellie that ends in a pretty abrupt manner.

Like most Edgar Wright movies, one standout is the soundtrack, which is an exceptional collection of Swinging Sixties tracks from artists like Dusty Springfield, The Kinks, The Searchers, and, if you’ve seen the trailers, a slinky cover of “Downtown” by Anya Taylor-Joy.  Wright also does a fantastic job of recreating 60s London that calls to mind what Tarantino did recently in Once Upon a Time in Hollywood and the lighting and way things are shot just oozes style and visual detail.  There aren’t some of Wright’s trademarks like kinetic, quick-cut edits but he does do a lot of interesting visual tricks with swapping Ellie and Sandie in the 60s scenes or having Ellie be observing things in different mirrors around the locations or being an invisible observer in the various locales.  I prefer his more dynamic style but it’s cool and impressive to see that he can switch to a slower and darker style while keeping up the visual flair.

Last Night in Soho is an intriguing departure from the usual Edgar Wright style and tone that provides a solid psychological thriller/horror story with visual flourish to spare and some excellent performances.  I would probably say it’s my least favorite Wright movie but considering the caliber of his other work, that’s like saying this is the least delicious steak of 6 delicious steaks and it’s still worth checking out.