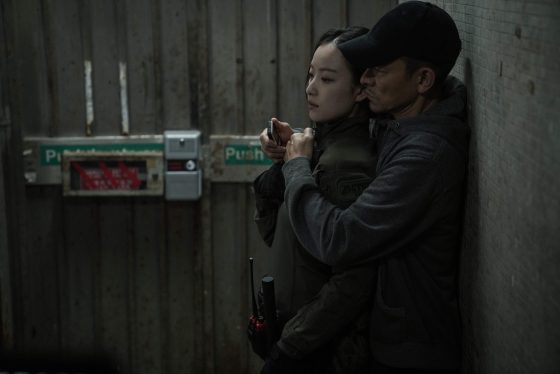 One of the biggest movies of last year worldwide, Shock Wave 2 arrived on VOD this week and stars Hong Kong legend Andy Lau as a former bomb disposal officer who gets caught up in a web of a terrorist plot made worse by amnesia brought on by a bomb blast he’s the main suspect in.

Lau plays Poong Sing-Fung, a decorated member of the Hong Kong police’s Explosive Ordinance Disposal Bureau or EODB. Caught by an unseen bomb at a hostage rescue mission, Fung loses his leg and tries to return to the field but he’s denied by the higher-ups, turning him angry and bitter. Five years later, he’s on-site and seemingly responsible for a bombing at a hotel but he’s caught in the blast and suffers amnesia. He manages to escape from the hospital and has to figure out who he is and how involved he was with a terrorist group known as Vendetta. One of the most fun aspects of Shock Wave 2 is that it is constantly twisting and changing everything you think is going on every 20 or 30 minutes with a huge reveal. It constantly keeps you on your toes and the whole movie moves along at a brisk pace and it also keeps changing your idea of who Fung is with each reveal that feels unique compared to a typical Western action movie. It also literally starts out with a bang with something I don’t think I’ve ever seen in a Western action movie before where the movie shows the consequences of the terrorist plot but then rewinds and says don’t worry, our hero stopped this. If you’ve seen any recent Chinese/Hong Kong blockbusters, you also know about how they can wildly shift tone. Shock Wave 2 is pretty consistent with a 24 style thriller vibe and it never radically shifts into goofy comedy like some other big Chinese movies but there are a few absurdly over the top dramatic beats, like a brutally protracted scene with a sniper shooting a police officer, but Andy Lau and the other actors fully commit and make them work.

As far as the action, there are some fantastic set-pieces throughout Shock Wave 2. There’s a chase through the hospital that is made even more impressive by the fact that Andy Lau is doing stunts while working with however they made it appear that his leg was missing, so he’s leaping down stairs and through windows while “missing” a leg. There’s also an excellent Point Break style foot chase through a marketplace as well. One thing to keep in mind is that Shock Wave 2 isn’t a big martial arts movie, so if you’re looking for highly choreographed fight scenes, you may be disappointed on that front as Shock Wave 2 is more focused on foot chases and shootouts. The bomb defusal scenes are also extremely tense and well done, like the one that ends with Fung losing his leg that, beforehand, feels almost like a Saw trap with a person trapped on either side of a wall with pressure switches and synchronized devices. The bomb-defusing and fugitive on the run aspects of the movie do seem to fade away as the reveals pile up and there’s a bit of time in the second half where the movie drags a bit before the climax but the ending action sequence is fantastic and huge. There’s lots of CG in the movie as well and while it doesn’t look quite as good as some big Western blockbusters, there are lots of interesting and fun little details throughout each scene that make them unique and they are also fairly brutal as well, especially the opening possible future where people are disintegrating from the blast.

If you’re looking for some more international action, Shock Wave 2 is a solid and fun action thriller that pulls in elements of The Fugitive, 24, and other Western properties and Andy Lau is great as always. The plot is constantly dropping huge twists and it keeps things exciting and keeps you guessing until the big, explosive finale. Shock Wave 2 is available now on VOD.