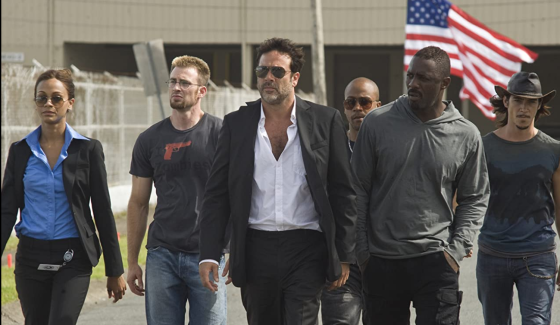 2010 was a crazy year for movies featuring all-star casts of mercenaries and/or assassins teaming up for some big action mission. The Expendables, Red, and The A-Team all hit in 2010, and getting somewhat lost in the shuffle was The Losers.  Directed by Sylvain White, who has mostly gone on to TV work, The Losers was based on the Vertigo comic of the same name by comic superstars Andy Diggle and Jock and followed a team of former black ops agents who fake their deaths and go off the grid after a mission goes bad.  Clay, played by Jeffrey Dean Morgan, is approached by the mysterious Aisha (Zoe Saldana), who offers Clay a shot at taking down his former boss Max (Jason Patric), who was behind the failed mission and the Losers current situation.  Clay regathers his team, which includes Chris Evans, Idris Elba, Columbus Short, and Óscar Jaenada to take on Max and stop his latest world-threatening plot.  Holt McCallany also co-starred as Max’s main henchman, Wade.  The movie had lots of solid action and fun banter between the cast but of the four similar movies released in 2010, it’s probably the least remembered and it also made drastically less money than the other three, only banking $29.8 million worldwide.  You can check out the entire movie below thanks to YouTube.