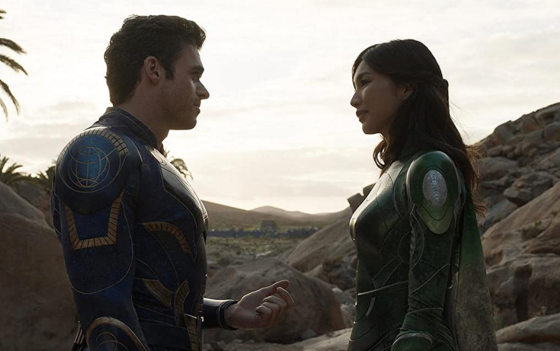 Despite the lowest score on Rotten Tomatoes for the MCU, Eternals still managed to dominate at the box office this past weekend, pushing Dune out of the top spot.

Eternals took in $71 million for the weekend, which is the fourth-best opening for the “pandemic era” behind Venom: Let There Be Carnage, Black Widow, and Shang-Chi and the second-best global debut behind F9.  For the MCU, Eternals’ opening puts it between Shang-Chi and Thor overall.  Eternals has $161.7 million worldwide so far.  Despite a lot of hand wringing about the reviews, it seems like the MCU is just fine box office-wise and will continue to dominate for the foreseeable future.

Dune dropped to second place with another $7.7 million, down about 50% from last weekend.  The movie has made over $84 million domestic and $330.6 million worldwide and it’s now the 10th highest-grossing movie worldwide for 2021 and is currently 12th on the domestic chart.

No Time to Die took third place with $6 million, bringing it to $143 million domestic and $667.3 million worldwide, which makes it the fifth highest-grossing film worldwide for 2021 and it’s the third highest-grossing Bond film behind Skyfall and Spectre.

Venom: Let There Be Carnage and Ron’s Gone Wrong rounded out the top 5 with the latter only dropping 4% from last weekend and making another $3.6 million, bringing it to $17.5 million for three weeks out.

The French Dispatch hit over 1000 theaters this past weekend, specifically 1,205 theaters, and jumped up to sixth place with $2.6 million.  It has $8.4 million domestically so far and $15.7 million worldwide.

Without its corresponding holiday, Halloween Kills crashed with a 73% drop from last weekend, pulling in $2.3 million.  Spencer, the Kristen Stewart Princess Diana movie, does not have an official number released yet from distributor Neon but estimates put it at $2.1 million.

Antlers and Last Night in Soho struggled to stay in the top 10 in their second weekends, falling down to ninth and tenth respectively.

Eternals also took the Per Theater average with $17,359 in each of the 4,090 theaters it played in over the weekend.