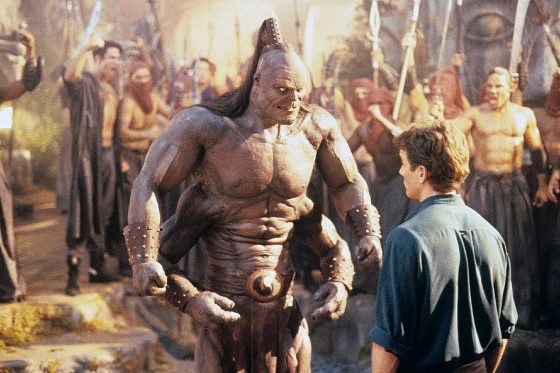 Even with over 25 years of special effects improvements and many more entries in the video game franchise, this year’s Mortal Kombat movie failed in some ways to live up to the cheesy greatness of the 1995 original, which is still a beloved favorite of gamers and 90s kids to this day.  Hitting theaters after the first three games in the franchise were out, the movie told the story of the original Mortal Kombat game as Liu Kang (Robin Shou), Johnny Cage (Linden Ashby), and Sonya Blade (Bridgette Wilson) are guided by the God of Thunder, Raiden (Christopher Lambert), to the island of the villainous Shang Tsung (Cary-Hiroyuki Tagawa) to try and win a fighting tournament against the forces of Outworld to stop them from conquering Earth.  From the still banging theme song to the slew of fights to an impressively practical Goro, there’s so much to love about the original Mortal Kombat movie.  The movie was a huge hit, staying at #1 for three weeks in the US and eventually making over $124 million worldwide off a $20 million budget. It put director Paul WS Anderson on the map but also led to the hilariously awful sequel, Annihilation.  You can watch the entire 1995 movie below and if you want to watch along with the Everything Action crew, we did a commentary for the movie that you can sync up.