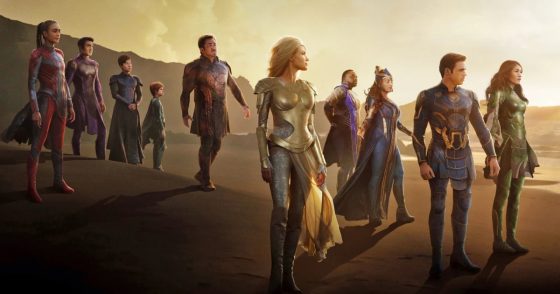 Eternals managed to remain at the top of the box office for its second weekend with a solid hold while Clifford the Big Red Dog had a solid debut for a kids movie in this “pandemic era”.

Eternals took in another $27.5 million, bringing it to $118.7 million for two weeks out and $209.4 million worldwide.  It dropped 61% from last weekend’s opening, which is much better than Black Widow earlier this year which had the biggest drop between opening and second weekend ever for the MCU but it wasn’t quite as good a hold as Shang Chi, which dropped around 54% between weekends.

Clifford the Big Red Dog took second place with $16.4 million for the weekend and $22 million total as it opened on Wednesday last week.  That opening is slightly above The Boss Baby: Family Business and slightly below The Addams Family 2 for family/kid openings of 2021.

Further down the list, Kenneth Branagh’s Belfast opened in seventh place with $1.7 million in 580 theaters, just edging out The French Dispatch and Spencer.

Eternals took the Per Theater average for the second week in a row, making $6,565 in each of the 4,090 theaters it was playing in.