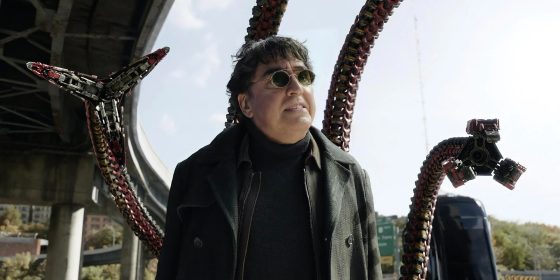 Although it still didn’t have any hints of the other Spider-Men that fans are anticipating will be in Spider-Man: No Way Home, this new trailer is packed to the gills with returning villains.  After his identity was revealed to the world by J. Jonah Jameson (JK Simmons) and being accused of murdering Mysterio at the end of Spider-Man: Far From Home, Peter Parker (Tom Holland) goes to Doctor Strange (Benedict Cumberbatch) to cast a spell to make everyone forgot what they just learned.  The spell goes wrong and villains from across the multiverse (and prior Spider-Man movies) start to arrive in the MCU to cause havoc.  The first trailer confirmed Alfred Molina back as Dr. Otto Octavius but this new trailer 100% confirms that Electro (Jamie Foxx), Green Goblin (Willem Dafoe) and Sandman (Thomas Haden Church?) are back.  It also appears that possibly Dane Dehaan’s version of Green Goblin will appear as well.  There’s an interesting tidbit that all these villains are destined to die at the hands of Spider-Man, which we saw in all their prior iterations and it seems like Strange and Peter get into a disagreement about how to deal with these multiversal intruders, with Peter perhaps unwilling to kill or let them be killed, despite their villainous nature.  There’s tons to dig into before the movie arrives on December 17th and you can check out the new trailer below.