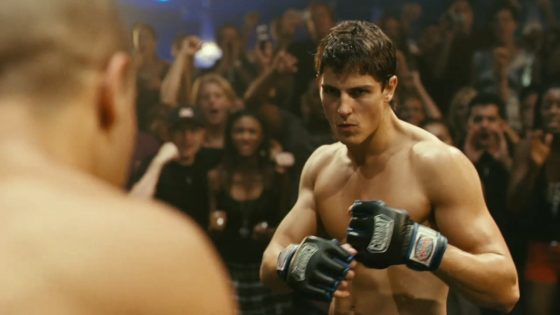 The fourth entry in the Never Back Down franchise was released this week on Blu-ray and DVD but this strangely extended franchise began back in 2008 with the ridiculous first entry.  Starring Sean Faris as Jake Tyler, he moves to the brutal world of Orlando where he catches the eye of local hottie Baja Miller (Amber Heard) but also the ire of wealthy MMA bully Ryan “The Terror” McCarthy (Cam Gigandet), who gives Jake a beatdown.  Jake seeks the guidance of local trainer Jean Roqua (Djimon Hounsou) who agrees to teach Jake the ways of MMA so Jake can take on Ryan in their inevitable rematch at a big tournament.  Evan Peters also co-stars as Jake’s obligatory friend who helps guide him into how his new school works and the world of MMA.  If this all sounds familiar, it’s because Never Back Down is a dumber and more broish version of The Karate Kid and it didn’t receive very good reviews when it hit theaters except for some from the like of Leonard Maltin and Richard Roeper who seemed to ironically enjoy its cliches and absurdity.  The movie made $41.6 million worldwide, which apparently wasn’t quite good enough for another theatrical movie but it’s become a DTV franchise with Michael Jai White directing and co-starring in the second and third entries and Never Back Down: Revolt being the latest entry.  You can watch all the over-the-top MMA mayhem below with the entire movie available thanks to YouTube.