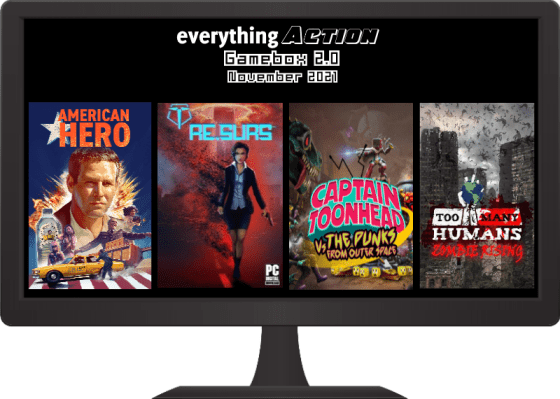 As we roll into the holiday season, we’re thankful for being able to check out another batch of games for the latest Gamebox 2.0. We branch down paths in a lost FMV game, lead an army of the undead, battled punks in VR, and fought paranormal cyberpunk demons. Check out everything we review this November below.

American Hero (Zach): Originally in development for the Atari Jaguar CD in the 90s, American Hero was never completed until the good folks at Ziggurat Interactive found, restored, and completed it.  Starring Timothy Bottoms as 90s action hero Jack, you basically get to control the plot of an over-the-top action movie where Nazis are trying to contaminate the water supply of Los Angeles to release a mind-control virus on the populace.  Jack gets pulled out of a retirement hanging out at seedy strip clubs to do one last job and rescue his true love, Laura (Musetta Vander), who is the only scientist who can create the antidote to the virus.  You watch scenes play out and then at certain points you’ll get two or more available actions and you decide what Jack should do next and the story continues.  There’s a direct line from games like this to what Netflix is currently doing with stuff like Bandersnatch and American Hero was designed to have much smoother transitions between scenes than some other FMV games of the 90s, like Night Trap.  There are a few times where you’ll need to mash a button to do things like run from a truck but it’s mostly just making choices as they come up.  Sometimes if you don’t choose in time, you may be either forced into a choice or go on a completely different path entirely. 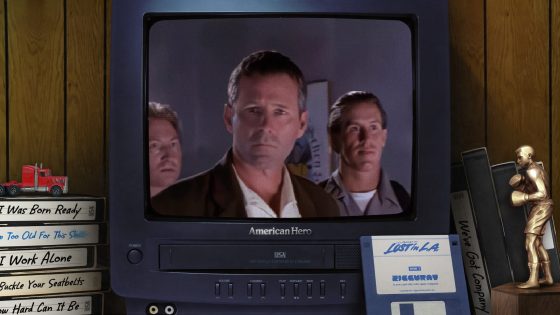 Since the gameplay isn’t really that in-depth, it’s really all about the quality of the FMV and the ridiculous plot and it pretty much delivers all the cheesy nonsense you could want.  Timothy Bottoms is a great, kind of dickish action hero who seems to always have a shit-eating grin on his face, a snappy one-liner, and ready to get down with any ladies he comes across.  There are other familiar character actors like Daniel Roebuck co-starring as well.  The game is worth playing multiple times just to see what kind of crazy scenarios you can get Jack into and it will take multiple playthroughs to try and see everything.  There are achievements for finding different paths and different endings but there’s one main “good” ending that you have to get to with the exact sequence of scenes and choices.  There may be some frustration or annoyance if you are going for the good ending, as if you make a mistake and Jack dies, you’ll have to watch from the beginning of the end scenario and it could take multiple tries to figure out and you’ll have to watch the same scenes over and over again.  Some of the scenes do have alternate takes or you’ll hear a new inner monologue from Jack but it can get tedious at times, although that’s the nature of FMV games.  If you’re a fan of ridiculous action and also this style of game, American Hero is worth checking out and it’s out on PS4, Switch, Xbox, and PC via GOG.

Too Many Humans: Zombie Rising (Chris): When humanity has pushed the planet to its limit, an army of the undead will rise and purge the problem. Developer RealityZ puts the players on the side of the undead in Too Many Humans, a zombie theme RTS where humankind needs to be wiped out. Players take up the role of Phtisis, a powerful god of the dead who has been summoned by his sister Gaia, the goddess of nature. Gaia has decided that humans are on a self-destructive path and sends Phtisis to control a legion of the undead to protect the Earth. Now Phtisis takes on humankind and turns their forces against them. 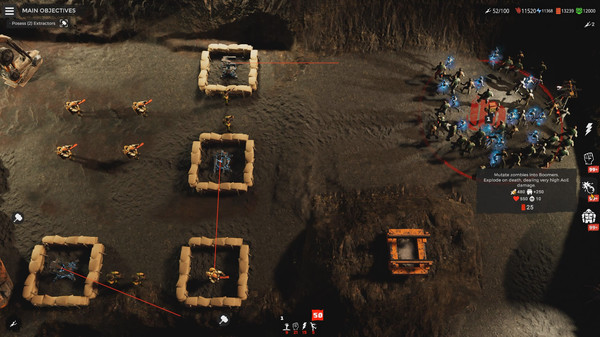 Too Many Humans has a simplified approach to the RTS with its use of zombie units. Standard units and specialty zombies cost resource points, such as human flesh and fuel. Zombies can generate more resources by finding them on the map or converting humans into the undead. The player controls a “screamer” zombie, which costs no resource points and gathers all the other zombie units at designated points or when the player drags it. The standard zombie, the Biter, cost the least amount of resources and are truly powerful in great numbers. They can convert humans into the Awaken that are slightly weaker than the Biters. These two units can be mutated into specialty units like Smashers and Boomers. Smashers can absorb more damage and take out heavy fortifications, while Boomers are waking bombs that do a large amount of damage for surrounding areas when they explode. Winning fights will take the right management of each unit to overwhelm the human forces.

While the gameplay is something on the casual side that works well for an easy pick up and play experience. The 3D character models are unfortunately a little too cartoony for the mature themes. There is an inconsistent look to the models that jump from voxels to rounded 3D models. The Screamer zombie in particular looks like it’s an asset for a completely different game. At the time of this review, there is only one episode out of three available, with more content on the way, I hope there is an update to get the models a new look. Too Many Humans fulfills a desire to be an undead leader. The simple mechanics make it fun to spawn groups of zombies and outflank the weaponry superior humans. Too Many Humans was released for PC on November 6th, and will have new episodes coming February and June 2022.

Captain Toonhead vs The Punks from Outer Space (Zach):  Out now on Oculus and Steam, Captain Toonhead vs The Punks from Outer Space puts you in the television head of Captain Toonhead, aka Elliott Salazar, who starts as the janitor of a mission to stop the evil Nicholas Voorhees and his Punk Army, who are building a weapon to annihilate Earth on a distant planet.  When the soldiers sent by the World Treaty for Freedom get zapped to death by a burrito put into the wrong microwave, Captain Toonhead is the only one left to save the day.  To battle the Punks, Toonhead can build a wide array of Toonrets, wacky weapons like pinata catapults, fireworks launchers, and hot sauce cannons.  The game is primarily a Tower Defense game and you have to strategically build towers along the path (or paths) that the punks will travel down and survive a certain number of waves to beat the stage.  Your main goal is to stop the Punks from reaching the end of the stage and capture Enercubes, the peaceful inhabitants of the planet currently occupied by Voorhees.  In addition to building Toonrets, Toonhead can also get into the action himself, teleporting to any of the turrets and blasting away at the punks with his weapons.  You can gain different weapons for Toonhead in addition to a wide array of Toonrets and the more Enercubes you save, the more upgrades you can unlock. 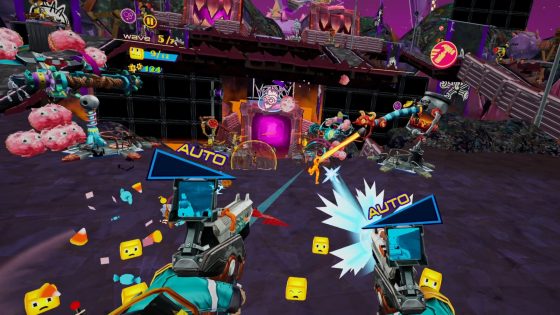 There’s a wide array of wacky enemies to take on from the base Punk footsoldiers to helicopter cats, T-rexes, land sharks, and more, each with a different movement or attack that you need to adjust your defenses for.  Every time you defeat an enemy, they drop scrap and you can collect it with your dual hammers and then use them to build new turrets.  The game has a fun Saturday morning style aesthetic with some solid voiceover and music, although on my original Oculus Quest there were some strange quirks, like choppy enemy movements, especially if you were looking at enemies coming from a long distance off.  Those kinds of issues are rare and I would imagine the higher in quality you go with a headset, the better it will look and perform.  The game does a great job of capturing the fun of Tower Defense while also putting you into the thick of things on the ground and it’s worth checking out if have a VR headset on Steam or the Oculus Quest.

Re.Surs (Chris): When demonic phenomenons terrorize a futuristic cityscape, it’s up to three heroes to stop the invaders from corrupting the world. Developed by a one-person studio  VidyGames, Re.Surs is an ambitious 2D side scroller title that mixes horror and cyberpunk elements. Re.Surs follows Jessie Sullivan, a paranormal detective brought out of forced retirement to help stop a rampant wave of supernature cases. Along the way, Jessie will come across allies and enemies as she follows a trail of clues down a sinister path. 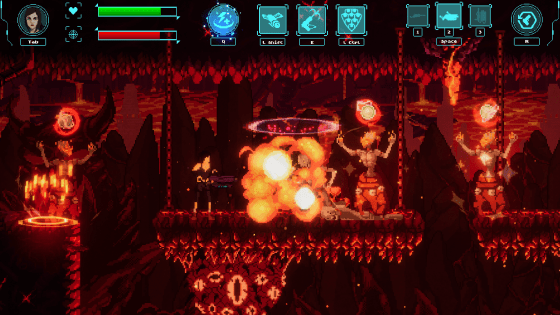 Re.Surs’ gameplay follow traditional 2D side-scrolling mechanics. There are basic movements to navigate around the levels, but when engaging in combat, the controls expand to have attacks and defensive actions. Re.Surs has some 2D shooting that lets the player take out the enemies on screen while trying to avoid incoming fire and dangerous pitfalls. For the first few chapters, you control only Jessie Sullivan. Sullivan has unique abilities like a Dark Dash that gives her a quick moment of invisibility while she leaps and the Detective Sense which allows her to concentrate and fire powerful shots at enemies on screen. There is a cybernetic barrier that can form a temporary shield that can absorb limited damage. In later parts, Sullivan teams up with Basil B. and Helga Hoft, who each have their own reasons to investigate the supernature outbreak and each brings their expertise to the combat. Each character plays differently and can be rotated out on the fly to find different advantages. Sullivan is more of a traditional run and gunner, Basil can do quick crowd control and Hoft is very agile with a defensive robot.

For a one-person studio, it is very impressive to see the amount of content developed. It is easy to see where VidyGames pays homage to Doom, Dead Space, Half-Life, and X-Files. The stages are varied by gritty alleyways, laboratories, ancient ruins, and hellish landscapes. The gameplay gives a decent challenge that does not make it a simple mindless shooter title. The fast pace action finds a balance between unloading shots and making spaces so the heroes don’t get overwhelmed by enemies. The plot isn’t totally original, but the gameplay is a solid indie title that deserves any action fan’s attention. Re.Surs was released on November 8th for PC.