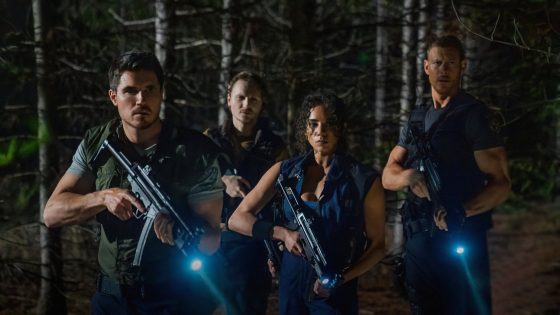 We’ve been in a Resident Evil renaissance in recent years with the incredible remakes of RE 2 and 3 and the excellent new chapters of VII and Village.  In other media, Resident Evil is probably best known for the ridiculous Milla Jovovich series, which ended in 2016 and there are also the hit-or-miss animated movies.  Resident Evil: Welcome to Raccoon City is probably the most faithful adaptation of the games so far but its somewhat baffling decision to try and cram Resident Evil 1 and 2 into one 90 minute movie makes it feel rushed with barely any time to explain plot beats to non-fans or flesh out the characters.

Set in 1998 (when Resident Evil 2 hit the PS1), the movie makes the events of Resident Evil and Resident Evil 2 take place simultaneously. Claire Redfield (Kaya Scodalario) returns to her hometown of Raccoon City to find her brother Chris (Robbie Amell), both of whom grew up in an orphanage run by the Umbrella Corporation.  Claire ran away but Chris stayed and was mentored by Dr. William Birkin (Neal McDonough), eventually becoming a member of the Raccoon City Police Department’s elite STARS team along with Jill Valentine (Hannah John-Kamen), Albert Wesker (Tom Hooper), Brad Vickers (Nathan Dales) and Richard Aiken (Chad Rook).  Umbrella is pulling out of Raccoon City and Claire is convinced they have been up to something sinister based on talking to a reporter on an internet chat and receiving a disturbing VHS tape message from him.  Claire and the reporter, Ben Bertolucci (Josh Cruddas) turn out to be right when the citizens of Raccoon City begin to turn into ravenous zombies and the STARS team finds themselves ambushed while investigating an incident at the old Spencer Mansion.  The main issue with RE: Welcome to Raccoon City is definitely the pacing and the attempt to cram both games into one movie.  Both RE and RE2 have enough plot for a movie by themselves and the movie doesn’t do either any favors with the cliff notes version here.  The movie barely spends any time in locations like the RPD, even though it looks right out of the game, and there’s really no explanation of stuff like the G and T virus or time for characterization for any of the characters outside of 1 or 2 basic details.  If you’re a fan of the games, you know where the plot is going and can fill in the gaps of the plot and characters but it seems like it would be pretty inaccessible for someone going in cold without that knowledge.  For all the rushed plotting, there’s also what feels like unnecessary flashbacks to Chris and Claire’s childhood that connect them to Lisa Trevor and Birkin but don’t add much and take away time that could have added more from the actual games.  For fans of the game, there is quite a lot to like though, despite the rushed nature of everything.  As mentioned, the settings are great and there are key moments from the games that are replicated well, like the iconic zombie turning toward Chris in the Spencer Mansion or the truck crashing and exploding outside the RPD.  The zombies look great as well and the movie does a great job of showing the disgusting devolution from sick humans to bloodthirsty zombies and there are the infected animals like dogs and birds from the games and creatures like the Licker and infected William Birkin look great as well, even with the more limited budget of the movie.  The movie also leans much more into the horror than the Paul WS Anderson/Milla Jovovich movies, which trafficked more in ridiculous Matrix-style action.  There’s plenty of solid set pieces, like Chris having to fight off zombies in a darkened room illuminated by muzzle blasts and his lighter, and the build-up of infection around town that feels much more in line with the games.

Of the characters, Kaya Scodalario has the most to do and the closest thing to an arc.  Her Claire is more harder-edged than the game version and she also doesn’t really develop the camaraderie with Leon that the pair built up in RE2.  Avan Jogia as Leon is fine but he weirdly functions more as comedic relief and is portrayed as more of an ineffective slacker than in the games.  The STARS team probably fares the worse compared to their RE2 counterparts.  Hannah John-Kamen is fun as Jill but she basically has no character development or traits besides being sexy and shooting well and Robbie Amell is pretty much just a wooden block as Chris.  Wesker is drastically different than the diabolical asshole of the games and the movie seems to want to make him likable and sympathetic, possibly because of actor Tom Hooper being able to do that well but it makes his inevitable turn not really land and it would definitely have been more fun if he was the cocky, sunglasses-wearing asshole of the game.  Donal Logue and Neal McDonough are chewing scenery as Chief Irons and William Birkin, with Logue giving a ridiculous 90s angry police chief speech as his introduction and McDonough leaning into making everything he does sinister but, like everyone else, they don’t have the time to get fleshed out and, in the case of Birkin, they barely set up the new detail of his relationship to the Redfields and it makes his ranting at Chris about how stupid he was to trust him in the climax seem to come out of nowhere.

Resident Evil: Welcome to Raccoon City is definitely a mixed bag that I overall enjoyed but the decision to cram both RE and RE2 into one short movie does a lot of damage to the characters and pacing.  If they had focused on one of the games and given it room to breathe with the same tone and eye toward sets and costumes and creature design, it could have been a fantastic adaptation but as is, there’s quite a bit for fans to enjoy from specific scenes and locations but non-fans are probably going to find themselves lost without the extra knowledge of who everyone is and what is happening.  The rushed pace also will probably not fully satisfy fans of the games as the movie rushes through both and also cuts out some things, like Tyrants and most of Ada Wong’s plot, that fans might be expecting or hoping to see.