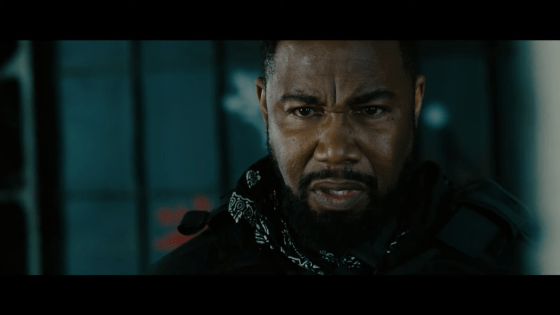 Michael Jai White faces off against Mickey Rourke in January when Saban’s The Commando hits select theaters, On Demand and Digital.  White is James Baker, a decorated and badass DEA agent who returns home to his family’s new house.  His daughters discover a bag of cash hidden under the floor of one of their bedrooms and keep it a secret.  Unfortunately for them, it belongs to a vicious criminal, played by Rourke, who gets out of jail and is ready to reclaim what is his.  Finding the girls while they are having a party while Baker and his wife are away, he takes them hostage to force them to reveal where the cash is hidden, forcing White to use his DEA combat skills to take down the bad guys and save his family. Jeff Fahey, Brendan Fehr and Donald “Cowboy” Cerrone co-star, and the movie was directed by Asif Akbar, whose been a director and producer on a number of shorts and VOD releases. It looks solid but hopefully, it’s not a letdown like Welcome to Sudden Death was.  The movie is out on January 7th and you can check out the trailer below.