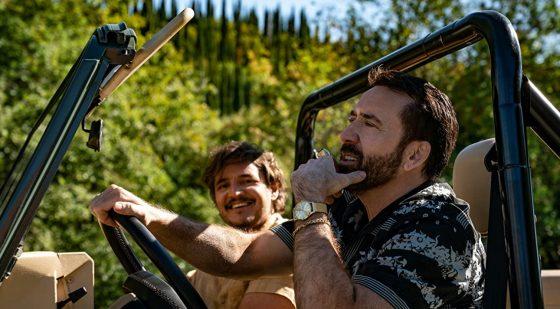 Nicolas Cage takes on his most challenging role, himself, in next year’s action/comedy, The Unbearable Weight of Massive Talent.  Cage plays a slightly exaggerated version of himself who is creatively unfulfilled and in debt.  When the offer to attend a private birthday party for a wealthy superfan for $1 million comes up, Cage takes it but finds his host is actually a drug lord that is under investigation by the CIA.  Pedro Pascal is the drug dealing superfan and Tiffany Haddish, Ike Barinholtz, Neil Patrick Harris and Sharon Horgan co-star.  The movie looks like peak Cage with tons of homages and Easter eggs for Cage superfans.  The movie was directed by Tom Gormican, who previously wrote and directed the movie That Awkward Moment.  The Unbearable Weight of Massive Talent is out on April 22nd next year and you can check out the trailer below.