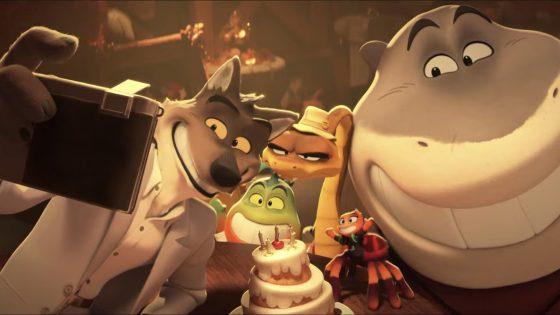 Based on a series of children’s books by Aaron Blabey, The Bad Guys is the latest from Dreamworks Animation that arrives in April next year.  Sam Rockwell stars as Mr. Wolf, who leads a team of animal criminals: Ms. Tarantula (Awkwafina), Mr. Pirahna (Anthony Ramos), Mr. Snake (Marc Maron),  and Mr. Shark (Craig Robinson).  When Wolf gets a taste of what’s it like to be good after inadvertently saving an old lady, he tries to convince his team to give up their criminal ways and help people instead.  Zazie Beetz, Alex Borstein, Lilly Singh, and Richard Ayoade co-star, and the movie is directed by Pierre Perifel in his directorial debut.  It seems like some of the other animation studios are catching up to incredible work coming out of Sony Animation with The Bad Guys having a similar look to Into the Spider-Verse and The Mitchells vs The Machines where it looks like traditional 2D animation layered on 3D characters and it looks fantastic.  The movie is out on April 22nd and you can check out the trailer below.