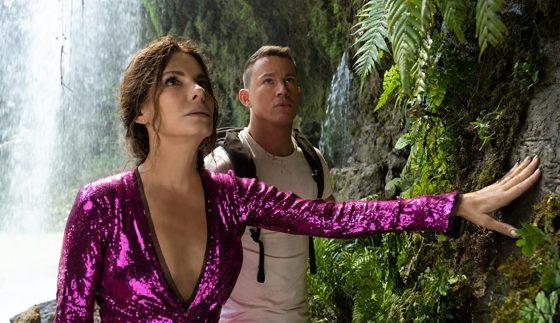 Sandra Bullock and Channing Tatum are teaming up next year for a jungle adventure of lost cities, dangerous creatures, and a psychotic billionaire played by Daniel Radcliffe in The Lost City.  Seemingly taking a ton of cues from the Robert Zemeckis classic Romancing the Stone, Bullock is reclusive romance novelist Loretta Sage.  Forced into public to promote her new book alongside hunky cover model Alan (Tatum), Sage is kidnapped by Fairfax (Radcliffe), who believes Loretta can lead him to an actual lost city full of precious treasure.  Alan sets off to rescue Loretta and the pair race to find the Lost City before Fairfax.  Patti Harrison, Oscar Nunez, Da’vine Joy Randolph, and Brad Pitt co-star, and the movie is directed by Aaron and Adam Nee. It seems like it could be fun, with Tatum doing his lovable lunkhead schtick along with the adventure elements.  The movie is out on March 25th next year and you can check out the trailer below.