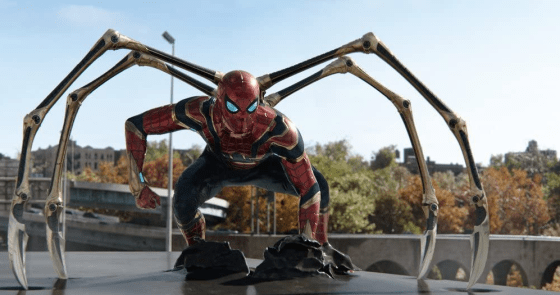 After all the hype, speculation, and rumors, Spider-Man: No Way Home has finally arrived in theaters and completely blew away all expectations, no matter how high they were set.

Picking up immediately from the end of Spider-Man: Far From Home, Peter Parker (Tom Holland) finds himself thrust into the global spotlight when his identity was revealed by Mysterio (Jake Gyllenhaal) in a video recorded as a  final act of revenge and spread by The Daily Bugle’s J Jonah Jameson (JK Simmons).  Half the world wants Peter’s head and the other is praising him but it’s ruining not only Peter’s life but Aunt May (Marisa Tomei), MJ (Zendaya), Ned (Jacob Batalon), and Happy’s (Jon Favreau) lives as well.  Peter seeks help from Doctor Strange (Benedict Cumberbatch), who has a spell that will make everyone forget that Peter Parker is Spider-Man but Peter screws the spell up during the casting with exceptions for who needs to remember and the spell backfires and instead draws everyone who knows that Peter Parker is Spider-Man the MCU, including legacy villains like Willem Dafoe’s Green Goblin, Alfred Molina’s Doc Ock, Jamie Foxx’s Electro, Rhys Ifans’ Lizard and Thomas Haden Church’s Sandman.  Strange tasks Peter with finding and capturing these multiversal villains so they can send them back to their own dimensions.  The movie does an amazing job of either reinforcing, in the case of Molina and Dafoe, why we loved those villains before or, in the case of villains like Electro, totally redeems them from their ridiculous past appearance.  Foxx shines when unshackled by horrific CG or 90s Jim Carrey style make-up and allowed to play up his charm and charisma.  Dafoe and Molina are great as always and it feels like no time has passed since they first appeared in the Raimi Spider-Man movies as they effortlessly fit back into their roles.  Tom Holland continues to be an excellent Spider-Man and No Way Home feels like the one where he is fully Spider-Man and not the next Iron Man and key events that happen to every Spider-Man give him emotional weight that he hasn’t had either.  The supporting cast has much more to do as well, especially Marisa Tomei’s Aunt May, who in the previous movies was mostly a joke about how hot she is and her wacky relationship with Happy and MJ and Ned are fully on-board with Peter’s mission for the entire movie and their dynamic is the best it’s ever been, which makes some of the events of the third act that much more heartbreaking.  Anyone else who shows up, in big or small roles, is utterly delightful and brought a big smile to my face multiple times.

If there was any sort of nitpicking with No Way Home, it’s perhaps that the set pieces, while great, don’t have any particularly memorable or stand-out moments, except for maybe particular moments in the third act climax.  There’s a fight between Peter and Doctor Strange that, while as visually interesting as the other Doctor Strange sequences we’ve seen, feels like it goes on a bit too long.  The character interactions and humor are what truly shine in No Way Home and also the way it builds and strengthens the prior Spider-Man movies.

No Way Home has the same energy as Into the Spider-Verse where it’s truly a love letter to everything Spider-Man, except this time for all the live-action iterations.  It creates all kinds of possibilities for the MCU going forward and delivers on all the spectacle, humor, and emotional heft you could possibly want.  This is arguably the greatest Spider-Man movie ever made and it’s easily my favorite movie of the year.