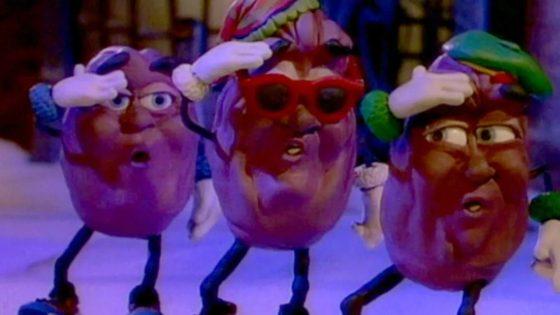 Debuting alongside A Garfield Christmas in 1987, Will Vinton’s A Claymation Christmas Celebration, commonly just called Claymation Christmas, was a holiday special that showcased the expert stop-motion animation skills of Vinton in a series of musical shorts.  The special was hosted by a pair of dinosaurs, Rex and Herb, who actually appeared in non-speaking roles in Vinton’s previous claymation special, Dinosaurs! – A Fun-Filled Trip Back in Time!, and they would have some banter, usually about the proper pronunciation and meaning of wassail before throwing to segments based on songs like “Carol of the Bells” or “O Christmas Tree”.  One of the big highlights of the special was a segment featuring the California Raisins, who were red hot at the time of the special and whose commercials were also animated by Will Vinton.  The special won an Emmy Award for Outstanding Animated Program and it aired for years alongside Garfield but it’s become something of a deeper cut in recent years and doesn’t occupy the same memory space as things like Frosty, Rudolph, or Charlie Brown.  You can watch the entire special below if you want some vintage Christmas cheer.